How to cover the roof with iron

For small slopes of the roof the roof is made of black or galvanized iron has advantages over other. For garage, baths can be made independently, by and large, nothing complicated here. The roof is of black iron, which is painted periodically, serve 20 years or more, and galvanized - more than 30 years. 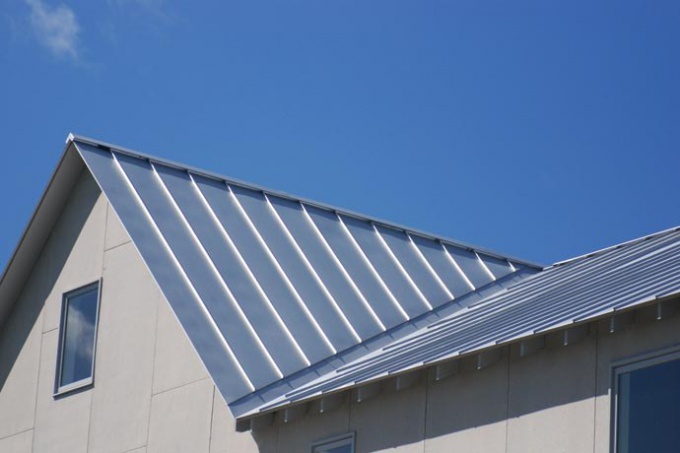 Related articles:
You will need
Instruction
1
Prepare black iron roof before beginning work. To do this, it will clean off the rust with a brush on metal, degrease with petrol or wash detergent. Then cover the soil with natural linseed oil with red lead on both sides. This is due to the fact that in the future the roof, paint the outside only. Roofing sheets connect flavum connection: supine or standing.
2
Manufacture of ordinary roofing painting — part of roofing, which prepared the edges for seam connection. They make a composite of two sheets, if the sheets with a length of less than 1.5—2.0 m.
3
Put the sheet on the edge of the workbench and apply with a Scriber line for a limb of the folded edge, holding the hand isn't moving. Then take a mallet on the corners at the risk of two of lighthouse limb. The worksheet is now locked, as will immediately be felt. Then the risk gradually atribuite the entire edge, turn it over and bent the edge of the mallet to fall on the plane. Preparing thus two sheets that connect to the lock, which seal with a mallet. For reliability, fold hooked with a hammer or metal bar. Prepare the edges of the standing seam in the same way, using grebney, but it can be done with two hammers.
4
Spread out pictures in rows in the direction from the ridge to the gutter. Then to first in the first row of the second strip in place, hooking the upper limb in the lower limb, previous, etc. Connect the pattern between the immobile folds, using for sealing steel strip 5х60 mm. In place of splicing of the paintings in the finished strip straighten the edges for standing seam. You want to skip all the ranks of the band over the ridge with the expectation that after cutting was able to bend ridged edge height 60 mm for single slope, and the other 30 mm.
5
Dump standing seam average coverage, which includes the ribs and the ridge of the roof, the side of the small limb about 80 - 100 mm, make small allowances. Reinforce strip at the ridge with a nail for a small limb, will verify its position using the cord.
6
Ordinary lock strip along the length of the small limb, pulling it tight to the sheathing with capping (metal strips with a width of 40 mm). Put the last with a ratio of two or more on each side of the sheet at a distance of 600 mm. Fasten them with nails to the side edges of the bars of crates, turning down the edge of a small limb.
7
Position adjacent ordinary lanes on the ramp so that the displacement of the recumbent folds in the patterns was not less than 50 mm. To do this, cut 50 mm each even strip at the ridge and cut the first ordinary strip along the adjacent slope. Connect ordinary strip single standing seam Grebneva and mallet. To do this, become the face of the ridge and head in the direction from the ridge to the eaves. Move bending scraper Grebneva close to a small limb, they should be on the same level. Then dump the mallet to the edge of the big bend in the plane of the scraper, simultaneously and smoothly perestanavlivaya grebney along the seam. Then turn it into an ordinary strip adjacent the bar should rest on the back edge of the seam, and seal the seam with a mallet.
8
Make the collar, so that the water did not flow near the chimney. It is considered to be the weakest element of the roof and the most difficult for non-specialists. To avoid gaps when assembling, be carefully to take measurements. If you are not confident in their abilities when performing a standing seam connection of the apron collar, instead make bends in the direction of water flow, and then their sclerite and propagte.
Is the advice useful?
Присоединяйтесь к нам
New advices