How to determine the type of cactus

In the world there is now a collection that would contain all existing types of cacti. This is not surprising, because they are more than three thousand. And new species appear every day. Cacti are perfect for collectors: most are medium-sized plants that do not require special care. They live a very long time without losing its attractiveness, and sometimes pleasing his owner's colors of great beauty. For proper care, you must know what type of cactus lives on your windowsill. 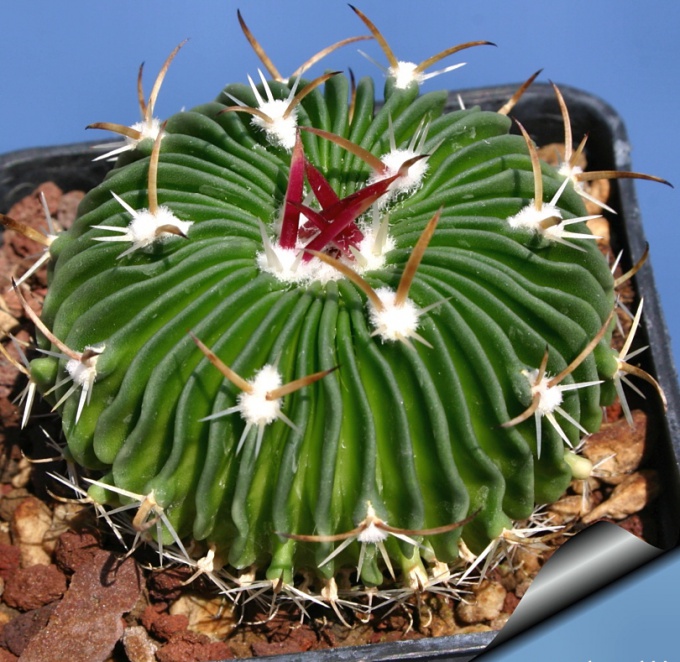 Related articles:
You will need
Instruction
1
If you buy cactus nursery or a collector engaged in the breeding of cacti, most likely you will learn the exact name of your pet and information on how to grow it. But in the store buying plants from Dutch mixes, you will not get any knowledge about what exactly you purchased. Only hope for your sharp eyes and wit.
2
Make sure that before you do a cactus. The main difference between the cacti from other plants is the presence of the areola. This is a small ploschadochka, from which grow spines, hairs, or bristles. Euphorbia, which are often confused with cacti, have no areola, they have the spines grow directly from the plant body.
3
A round cactus, the areola of which are not located on edges, and protruding dermal papilla, and gives abundant root growth is likely to be mamillaria or Rebutia. They can be distinguished until flowering. Have mammilyary flowers appear around the top, Rebuzzi – near the base of the body of the cactus.
4
If the cactus is very similar to Mammillaria, but virtually forms kids, maybe you see a parody. These cacti differ globular form with tuberculate papillae, which are located on the areola.
5
Cacti with prominent rows of thorns, seated on a more or less high ribs, very common. Most often sales are Echinopsis. These cacti have rounded stems, and very fine flowers. As a rule, tubular flowers are white or pink, very fragrant. In young, Echinopsis have a spherical shape, but with age stretch. These cacti form a lot of kids.
6
If your Echinopsis bloom on top of yellow or red flowers, maybe it's not Echinopsis. It lobiviya belonging to the same class as Echinopsis.
7
If you purchased ribbed columnar cactus, densely covered with silky white hairs, you are lucky. Rather, it is cephalocereus or "old man cactus". His silver hairs can reach 30 cm Each areole bears 3-5 gray or yellow spines up to 4 cm in length. Similar to cephalocereus, espostoa woolly, but she has more acute spines.
8
Columnar cactus with slender stems and short ribs, densely covered with spines, branching almost from the base, will likely be one of cleistocactus. The areola of cleistocactus with a large number of the bristles are very close. The flowers are tubular and very bright.
9
Impresses with its long well developed spines Ferocactus. Spines can be straight or curved, usually brightly colored. The cactus often has a spherical shape with a high, thick ribs. Areola large, well-developed.
10
Very attractive astrofitum living in deserts. These cacti differ in a thick bluish waxy bloom on the surface of the ribs. Typically, edges a little,they are often twisted and devoid of thorns.
11
Another numerous race desert cactus is prickly pear. Is a cactus with flat leaf stems, similar to tortillas. Prickly pear bloom very rarely at home, are growing rapidly and have an interesting bizarre form.
Is the advice useful?
Подписывайтесь на наш канал