A writ is a document issued by the court the party who won the case and is entitled to recover a certain property or funds from the other side. Actually, for such penalties the writ is issued - it enshrines that right. The process of obtaining a writ of execution in the civil process similar to the process of getting to arbitration. 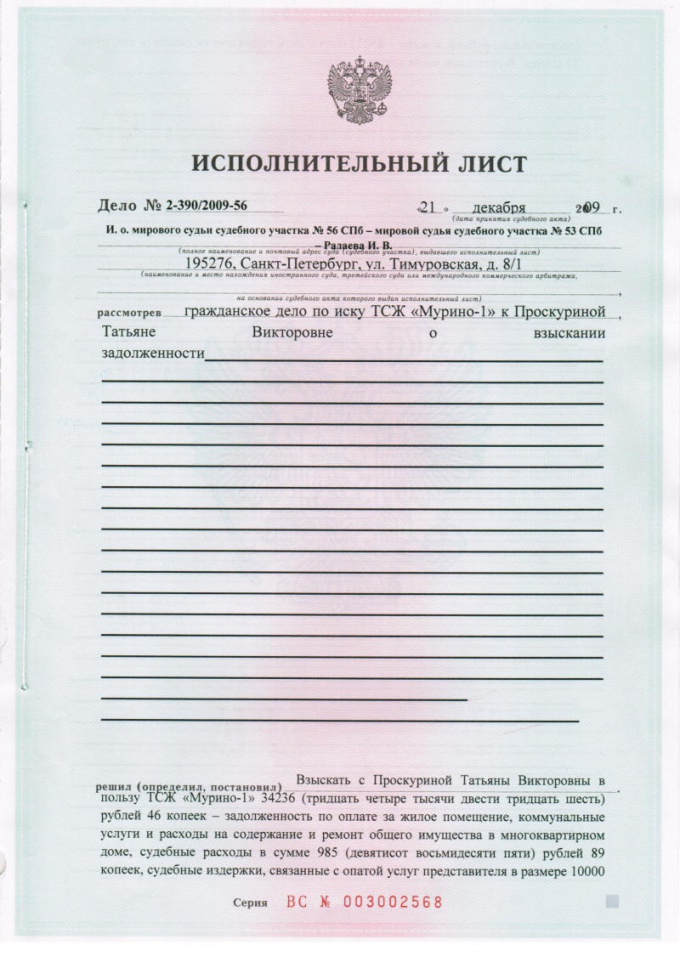 Related articles:
Instruction
1
Under current law, a writ is issued to the claimant after the court decision comes into force, if the case was considered in the first instance after the court of first instance decision on the case law provided a 10-day period to appeal the decision, and only after this period, the decision comes into force). The writ may be issued immediately after the court decision in the case of immediate execution of the judgment. Immediately executed the decisions of the courts of appeal and cassation.
2
The writ can be obtain in person at the court, when the court order came into force. If the claimant for one reason or another, cannot take away the writ personally, at its request, the sheet can be directed by the court for execution.
3
In the same judgment can be issued several writs. This happens in case if the decision was made in favor of several plaintiffs or against several defendants. In cases where the execution of the judgment should be in different places, should also be issued a few writs. Each must be specified the place of performance and which part of the court's decision is enforceable in the place.
4
If the claimant has lost the writ of execution, he may apply to the court to get a duplicate of it. However, it is quite a long procedure, since the law of the application for issuing the duplicate writ shall be considered at the hearing. The parties do not have to be present at this meeting - their absence does not prevent the court to consider the issue of a duplicate writ of execution. However, the side will waste a lot of time.
5
If the case was heard by the arbitral Tribunal, and the prevailing party must obtain a writ of execution, it must apply for issuance of a writ of execution in district court at the place of location or residence of the debtor. The judge of such a court must consider the application within one month and decide at the hearing on the issue of the writ. The parties to arbitral proceedings do not have to be in this meeting.
Is the advice useful?
See also
Присоединяйтесь к нам
New advices