How to prune a Yucca

The Yucca elephant is the only plant of this genus found in our apartments. She's low-maintenance and very decorative straight stiff, like swords, the leaves are pleasing to the eye with its fresh greens. The last time there was forms of Yucca leaves, with the edges yellow or white stripe. However, with age, the stem becomes bare, the leaves droop and look sloppy. It's time to trim the plant and give it a more interesting look. 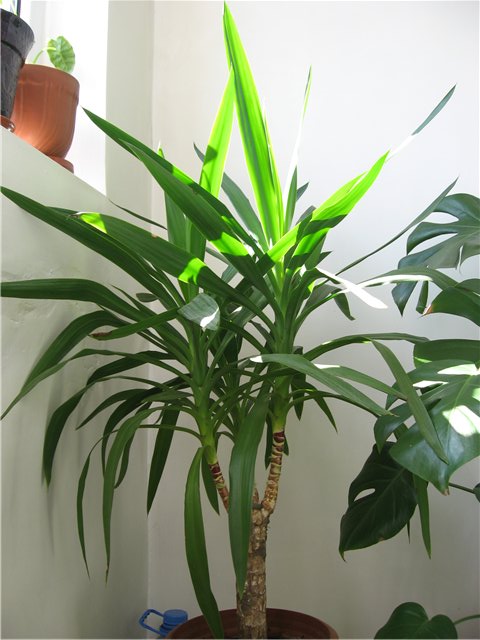 Related articles:
You will need
Instruction
1
Before circumcision Yucca, note that the growth of the trunk over. He will forever remain such a thickness and height of what it is at the time of trimming. Think, do not rush. It is best to produce a crop of the barrel when it reaches the thickness of 5 cm or more.
2
Pruning is best done before the beginning of active growth. For Yucca this period begins with the advent of the spring sun, that is in late February - early March. Yucca happens to hail from South America and are accustomed to lots of light. Provide this condition, if you want to get a beautiful well-developed plant.
3
Take a sharp knife and treat it with alcohol. The knife should be strong, because you have to cut dense woody tissue. Very well suited for this procedure a knife with a serrated blade.
4
Select the point where you will produce clipping. It should be high enough from the ground surface. It does not matter if below this point are individual sheets. After circumcision they themselves will shrink and disappear.
5
Gather the leaves into a bundle and bring them together with the barrel broken hand. Second hand gently cut the stem at the chosen height. The main condition – do not attempt to twist off the partially broken stem. So, you will damage the growing point, located on the trunk. Hold the tip until, until it is completely separated. Do not use force, just gently cut the stem sawing motion.
6
After the tip is separated, sprinkle the cut ground cinnamon without sugar. This will disinfect the wound and will not allow to penetrate the tissues of plants to fungal diseases. If you like cinnamon, you can replace it with a couple of crushed tablets of activated charcoal. But slice, sprinkled with charcoal, it looks not very aesthetically pleasing, so still trying to find cinnamon. It is constantly sold in the confectionery departments in supermarkets.
7
Now you just have to put the trimmed plant in a bright place and watered. Please note that due to the reduction of green mass moisture evaporation is also decreased. Try not to fill the plant. Enough of watering once to twice a week.
8
After two or three weeks you will Wake up dormant buds near the cut. There may be several. Each of these buds will develop into a separate barrel. Then the plant will already increase the thickness of the new shoots. If you Wake up more than three kidneys better remove the excess. The plant will be difficult to develop a large number of shoots. Enough three pieces. If the barrel before cropping had a thickness of more than 5 cm in diameter, you can leave four of escape.
9
The top left after circumcision, circumcised to plant Yucca, and can be planted in a separate pot. Express cut a piece to podvjalivajutsja within two to three days. Then plant in slightly moist substrate and water it moderately. After a while the tip will take root and you will have a new plant. The main requirement – keep track of temperature. In order to take root, Yucca needs the ground temperature is not below 20 degrees.
Is the advice useful?
See also
Присоединяйтесь к нам
New advices