How to furnish small Studio apartment

On the topic of how to furnish a small Studio apartment, you have pretty smash his head. It would be desirable that the apartment had everything we needed for life, and at the same time that it no longer resembled a warehouse, where literally nowhere to turn. To increase its General living area, you can not, however, furnish it reasonable, rational and beautiful is possible. 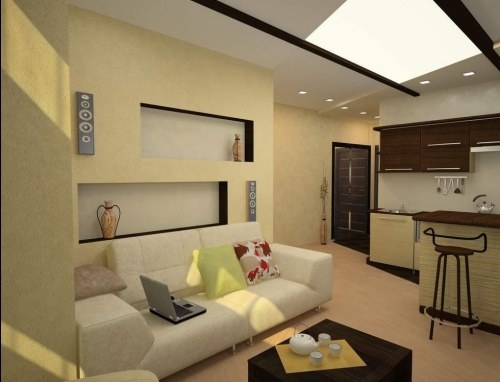 Instruction
1
Some people living in one-room apartments, trying to visually enlarge them, demolishing almost all of the partition walls between the bathroom and the kitchen, between the bathroom and hallway. Perhaps, to do so still not worth it. First, the smell of cooking in the room then will be felt much stronger. Second, when you open the front door to be visible to the stairwell, and it may be a draft. Thirdly, in this apartment, neither of which personal space can't be out of the question, just to be alone nowhere, except in the bathroom, and is a recipe for nervousness and conflicts.
2
It is much wiser to do so: choose only the most necessary minimum of household items, without which you will not be able to do. From the kitchen there is refrigerator, sink and stove (gas or electric). Small dining table (if your family prefers to take meals in the kitchen, not in the room) it is possible to make a folding, fastened to the wall. If required cover is lifted up and is fixed in a horizontal position with the retainer. It is quite possible to use as a work surface when cooking. So it will be saved a lot of space.
3
Utensils store in hanging lockers. Try to do without outdoor. In an extreme case, if there is not enough space for crockery and Cutlery, make or order a homemade Cabinet under the window sill.
4
Instead of swing doors, creating a "dead zone" where nothing can be placed, put at the entrance to the kitchen and the living room light sliding door type bunching or hang curtains of thick heavy material.
5
For the living room try to purchase the most suitable for the size and functionality of the closet-wall, preferably with a corner wardrobe and alcove for TV. If it establishes a corner of a geek with a retractable cover for the keypad and a vertical niche for a computer, it will be fine. Compartment where there are sturdy shelves, use as a library, and the one where the shelves are glass for the tea and glassware.
6
As sleeping places would be better served sofa with inner compartment-a box for linen. If the family has children, it is desirable to select a wall that is already equipped with a bunk bed.
7
To create a room seem visually more paste over Wallpaper its warm and light colours (eg yellow, pale yellow) in a vertical strip.
Is the advice useful?
Подписывайтесь на наш канал