Cactus – the most heat-resistant perennial plant. There are more than 2 thousand species varieties. Some cacti are used for medicinal purposes, others edible, others contain narcotic substances and may be hazardous to human health. 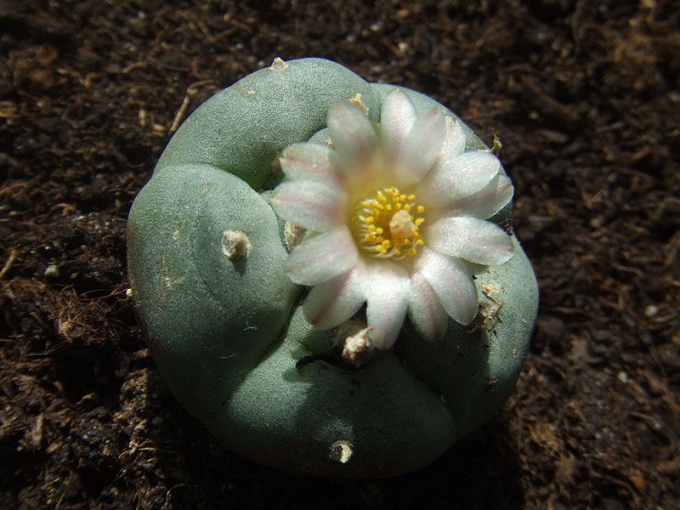 On the intoxicating properties of some species of cacti from time immemorial knew the Indians of Central and North America. They used them in their religious cults. After drinking narcotic flower of the Indians has hallucinations, during which they communicated with the spirits.

One of these plants is the peyote cactus (Lophophora williamsii). It is a bluish-green color, and instead of barbed needles on it grow soft white "crests". This cactus contains a powerful hallucinogen is mescaline. How to tell connoisseurs, the taste of peyote is very bitter and leaves the mouth very unpleasant. But if you use it not on an empty stomach, occur nausea and vomiting.

In addition to harmful narcotic effects on the human body, peyote is considered a good analgesic and antibacteriological means. Use it to treat toothache, and fever, asthma, neurasthenia, and many other diseases.

Another cactus, causing narcotic intoxication – a San Pedro (Echinopsis pachanoi). It is a large columnar cactus. Its height reaches 6 meters. Also like peyote, contains mescaline. San Pedro is considered a sacred ritual plant among the shamans of Peru. They believe that the cactus may help to understand the meaning of life. From slices of San Pedro shamans are preparing a drink that causes hallucinations. It is used when entering into a trance. Also small doses is sometimes used as an aphrodisiac.

In jail for the flower on the windowsill

It should be noted that to grow the cactus with narcotic properties, on the window sill is almost impossible. In order to keep the plants developed hallucinogenic substances, he needs a certain climate: scorching sun of the American desert, the chemical composition of the soil and the difference in day and night temperatures. Fans of intoxicating substances, who have tried to grow cactus drug at home, except unpleasant taste and odor, and severe diarrhea, any unusual sensations not experienced.

Despite this, the cultivation of cacti peyote and San Pedro is banned in many countries. Among them Russia. For breeding these plants in great quantities, under the Criminal Code of the Russian Federation, can be imprisoned from 3 to 8 years. A large number of considered 2 or more cacti. And for one plant may impose a fine of 500 to 700 minimum wage. So, being fond of farming cacti, pay attention to such nuances. Even if the "flowers of the desert" you breed just for beauty, ignorance of the law does not release from responsibility.
Is the advice useful?
Присоединяйтесь к нам
New advices