Beautiful and such a familiar metaphor "weeping willow" is based not only on folklore but also on the results of scientific research. Willow is really "crying", because the tree is inherent in the guttaciej in which the leaves emit small droplets of liquid. 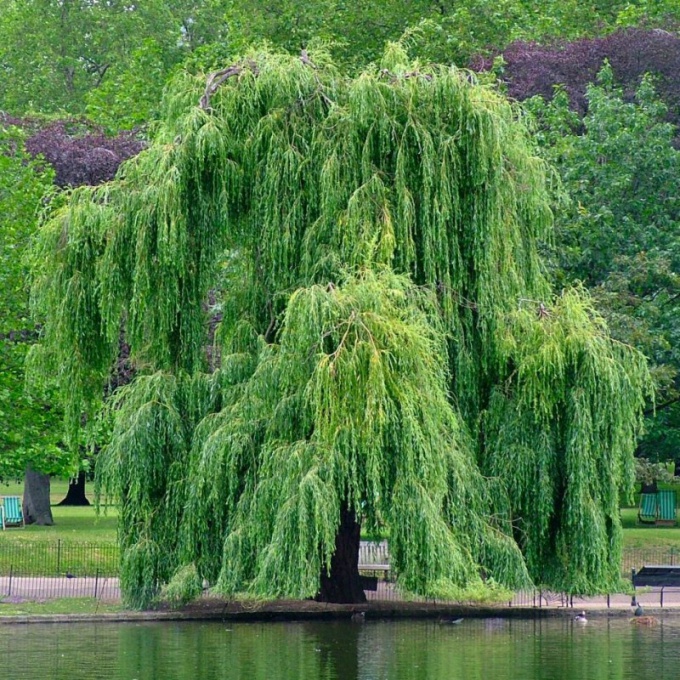 Related articles:
Weeping willow cause controversial emotions. On the one hand, a large, massive, big and beautiful tree. On the other hand, IVA is a mystery, a mystery which has a fascinating appearance. The way willow is reminiscent of a sad girl, who bowed his head, and the wind ruffles her hair-branches. Have you noticed that willow trees grow mainly around ponds? So "tears" from a tree falling on surface of water, form many traces – divergent circles. Tears fall on the trunk and roots fall to the ground. As if the willow weeps for unfulfilled dreams and the longing. I wonder what willow is crying in the night or early in the morning, again causing the Association with the girl that day cheerfully and looks gorgeous, as dusk begins to be sad.

Willow, growing mainly in ponds, lakes and rivers, gets moisture in excess. Her roots are deeply enough immersed in water, and the humidity around the reservoir significantly increased. Therefore, excess water must somehow get rid of, because it is necessary to maintain the normal balance of biological processes. So, willow, how would "merge" all the unnecessary water through the leaves, i.e., "crying".

The process of gulali – selection of moisture through the leaves, it is very rare trees, but it is inherent in many cereals, especially in the turbulent period of growth.

Russian people willow has long been considered one of the most powerful amulets against evil forces. This tree is associated with many legends and mysterious stories. It was thought that willow was crying because inside it lived a girl who lost a loved one.

Recognized the beauty of the willow

The willow tree is called the Babylonian, because in ancient times it willow was used for landscaping along with poplar and tamarisk. This old tree in my 60 years can reach a height of about 15 meters. Most likely, and associated with this frequent mention of "the old weeping willow that grows on the banks of the river."

The blooming willow is a truly beautiful sight. She happily dismisses his silver earring. And it's like the only time willow forgets his anguish and sincere rejoicing.

It is worth noting the fact that IVA is not only the tree of mystery, but still very useful plant. In ancient times people were successfully treated for fever by a willow bark infusion. It contains a substance called salicin, and it has a good antipyretic effect. But to live near bodies of water, decorated with willow trees, people did not want. The reason is a belief that persistent tears of the willow transmitted and the number of living people.
Is the advice useful?
Подписывайтесь на наш канал