Sea buckthorn got its name due to its healing berries, which are literally stuck to its branches. In the wild it usually grows as a shrub, gardening – can be a shrub, and quite a powerful tree, reaching up to 4 m in height. However, the bloom of sea-buckthorn is not decorative. 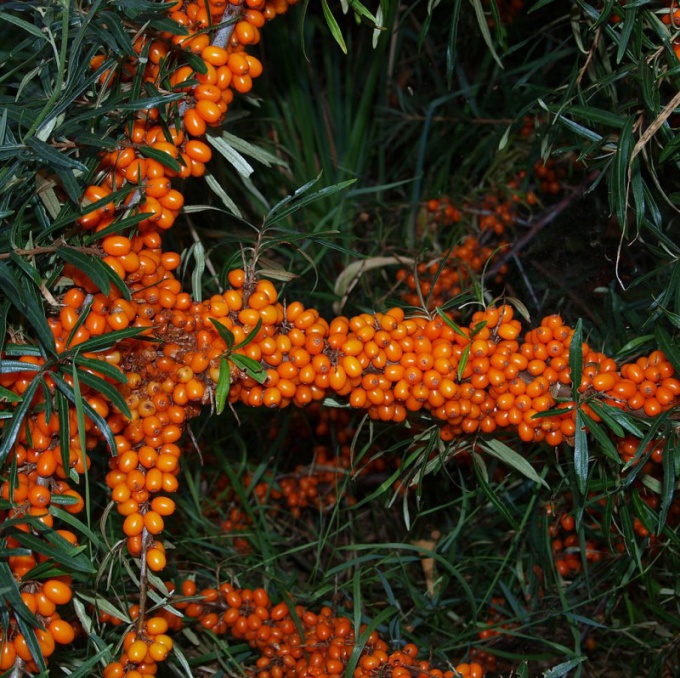 Sea buckthorn belongs to the dioecious plants are wind-pollinated; that means that some of its trees grow only female (pistillate), while others only male (staminate) flowers. It is clear that female plants bear fruit, and men just bloom, forming pollen. Therefore, it would be necessary to plant both female and male plant. However, prior to the entry into the period of fruiting to distinguish between them is almost impossible. Sex can be determined in the kidneys only at the 3rd – 5th year life of the plant. In males the kidneys larger and covered with scales, in the female they are much smaller, they have only 2 or 3 scales. Interestingly, male plants sometimes tie a single fruit, but they grow very small and unsuitable for human consumption.

Sea buckthorn blooms before the leaves bloom in early or mid-may. On the female plants bloom with short brush, consisting of 2-5 yellowish flowers. Male flowers are a bundle of silvery-brown stamens with pollen so small that even a gentle breeze quickly transfers it to the female flowers. When you shake the flowering branches of the male plant, it is immediately wrapped in a cloud of Golden pollen. I must say that the flowering of sea buckthorn almost nobody notices, as her colors are too plain and shallow. Due to the lack of flavor, they do not attract bees.

The beneficial properties of the fruit

Since the beginning of flowering to fruit maturity is from three to three and a half months. Spectacular bright yellow, orange or orange-red berries ripen in August – September and remain on branches until late autumn. However, it is better to collect them quickly, because there is a risk that they will be devoured by birds. Young plants produce 5-6 kg of berries, but after 2 years, the productivity increased almost 4 times.

Sea buckthorn - one of the most valuable medicinal plants, about the healing properties of which are legendary. Its fruits are the best natural bearers of vitamins and the bark contains serotonin, which is used as an effective antitumor agent. Sea buckthorn oil promotes the reduction or complete cessation of pain in the course of the inflammatory process, rapid healing of wounds. Gardeners use the fruits of sea buckthorn for the manufacture of oil, juice, syrup and alcohol tinctures.
Is the advice useful?
Подписывайтесь на наш канал