Why hang castle during the wedding

Hang castle during the wedding, it is accepted in many countries. The modern custom came from the pages of a novel by Italian writer and caught on, despite the fact that Russia has its own rituals associated with locks and weddings. 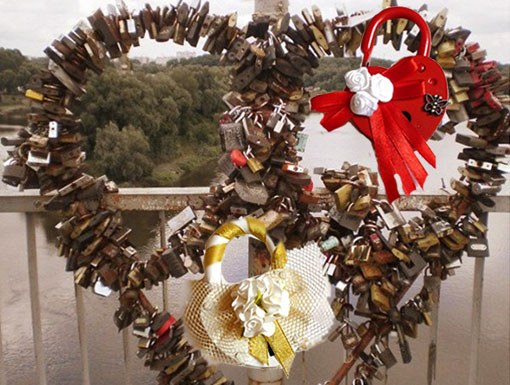 Related articles:
After painting in the registry office the newlyweds travel to wedding way traditional destination weddings. Be sure to include a visit to the bridges where you are just two of the ritual. The groom should carry the bride in his arms across the bridge and together they put a padlock on the fence. Lock locked, and the keys thrown into the water.

It should symbolize love, closed tightly and protected from bad interference in the relationship of the couple. And free, inspiring? Somehow it does not fit the lock with a boundless joy.

Locks bought in conventional stores or make to order. Engraved with names and dates of marriage, make labels. That lack of imagination of organizers and customers of the ceremony.

Where did this custom and how old he is.

Custom from the category of fashionable and artificially introduced into life.

Lived in Italy writer Federico Moccia, wrote a book called "Three meters above the sky". And the thought occurred that the characters in his novel have the oath of allegiance to fasten a lock, locked on the grid of a Roman bridge across the Tiber river.

After the book's publication in 1992, the custom, like a snowball, rolled in the light. The lovers rushed to hang locks on the fence all bridges in all the cities of the world. From them it was intercepted by the organizers of weddings, is included in the scenario of weddings.

Custom has become a punishment and a headache for city authorities. The bridges that adorn the city with their delicate grids, has turned into an ugly, bristling of different-sized locks something.

Regular locks are cut and discarded that completely denies the custom of the meaning of "bond of eternal love."

Why would hang a symbol of inviolability if it is in the next RAID trite cut off and thrown in the landfill?

At the same time, if you ask all the participants of wedding ceremony, from the newlyweds to the guests, whether they have read the book of Italian, few would answer in the affirmative. "Taken, like, hang the locks, that hang".

Omens and beliefs about castles in ancient Russia.

Meanwhile, in pagan times, in Russia существовалb their own rituals and signs associated with locks and creation of a new family. They had a slightly different meaning and different in execution.

It was believed that when the couple takes the young wife over the threshold of their joint home (right after that and before you include someone else), under the threshold buried or hid the castle. The key was thrown into a place where nobody could find him.

Thus, lock is not love itself, and peace and prosperity, the prosperity of the new family nest.

In other embodiments, the lock is hidden under the threshold of the future home the bride and groom after the engagement, that would be no one and nothing could disrupt arrangements for the wedding and to destroy the relationship between the lovers.

This Russian custom, full of meaning, it seems most appropriate in the wedding ceremony. And the rite observed, and the appearance of city bridges is not spoiled.

Now, thanks to Internet awareness, many newlyweds refuse senseless new tradition to hang the locks during the wedding. They are looking for in the traditions of his people rituals, amulets, in which our ancestors believed, and which a lot of more sense and wisdom.
Is the advice useful?
Присоединяйтесь к нам
New advices