As there are whirlpools

The vortex – a spinning column of water which in the opinion of our ancestors could destroy everything with your path and tighten in your throat ships, boats and floating structures. The whirlpools are formed by sudden expansion channel flow projections over the shore and the collision of two currents. 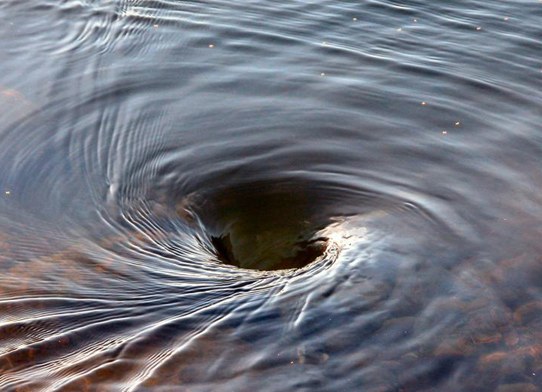 Related articles:
The whirlpools can be observed in small rivers and in the seas and oceans. The big danger they represent, but also completely harmless they aren't. On the river the vortex can delay a man, and he will choke. It is dangerous for boats without engine. Large sea swirl is better all to watch from a safe distance.

A vortex is called a natural phenomenon which results in the circular movement of water in the upper layer of the pond, river or ocean. The cause may be the fusion of two currents of different speed and temperature in some parts of the waters or channel of rivers. Revolving in a small space, the water rushes to the outer edge of the vortex, resulting in the centre creates a hollow. The same natural phenomenon can be observed when a sudden expansion channel and flow projections the shore by the current. Marine eddies arise at collision of habitats and tidal waves and counter-currents. Sea water in the vortex can move at very high speed – up to 11 km/h and above. The funnel size in the open ocean can reach several kilometers.

In the whirlpool of river the water is rotating with the speed equal to the speed of the main flow. Whirlpools can form deep pits and are typical for mountain rivers. In the mountains very often formed of suwadi: in this natural phenomenon the water rotates over the surface or underwater mountains market or ledge in the Yar. A whirlpool formed by two currents with different speed and direction. Place of education suwada can serve various hydraulic structures – dams, levees, foundations of bridges, etc. Very often large suwadi formed during floods.

In places where this phenomenon is formed continuously, the whirlpools are called constants. Seasonal eddies are formed in certain times of the year and there are intermittent. The most common type are the occasional whirlpools. To predict the place of their formation impossible as to count the possible damage they can cause. The whirlpools can be observed in various parts of the world. The largest known Maelstrom, off the coast of the island of Moskenes in Norway, Charybdis and Scylla in the Strait of Messina between Italy and Sicily and the vortex formed near the Niagara falls. The first record of Malstrem appeared in the 16th century, and about Scylla and Charybdis wrote Homer as two monsters, with power and cruelty which had to face Odysseus and his crew.
Is the advice useful?
See also
Подписывайтесь на наш канал