How to write a Pascal program

Pascal is one of the most popular programming languages. He is known due to its relative ease, and in some schools it is included in the compulsory General education program in Informatics and ICT. Facilitates writing programs that bundled with it comes the compiler. 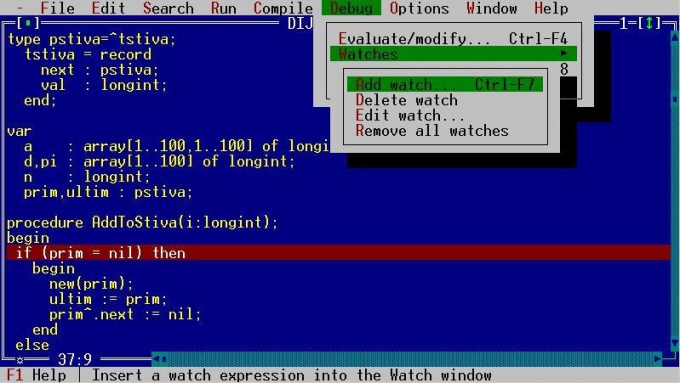 Related articles:
You will need
Instruction
1
To write the program in Pascal, you first need to open the environment for programming. For this you need to run the file Turbo.exe that is the folder with the program in the bin directory. Next, a window appears blue, which is the editor.
2
To implement the program must first determine its name and use its set of variables. For example, there is the task to implement addition of two numbers. In this case, it would need to create 3 variables – A, B and C respectively.
3
Next, you must determine the type of variables. In addition you can only use numbers, so it is advisable to assign the type Integer (integer).
4
You then need to perform operations calculations.Overall, the program will look as follows:"Program Addition;var A, B, C: Integer;beginA := B + C;end."
5
Now that the program is written, it needs to save, compile and run. The saving is by choosing the appropriate item in the menu (F10 – File - Save). This will open a dialog box where you will need to select a name and location to save the file.To compile the program without running need to hold down the Alt key and F9. If the application contains no errors, then Pascal will display the message "Compile Successful: Press any key".To run the program, use the Ctrl and F9. If it says the program starts without error messages, it works correctly.
Note
Cannot be used in variables names Russian letters, punctuation marks and special characters.
Useful advice
To become good at this language, need more practice, because the theoretical part is it does not play the main role.
Is the advice useful?
Подписывайтесь на наш канал