Olympic symbols - is what distinguishes a game of such magnitude from the other world competitions. She was born along with all the movement and presents a range of different attributes. Some of them are basic and immutable, others change depending on where one or the other Olympics. 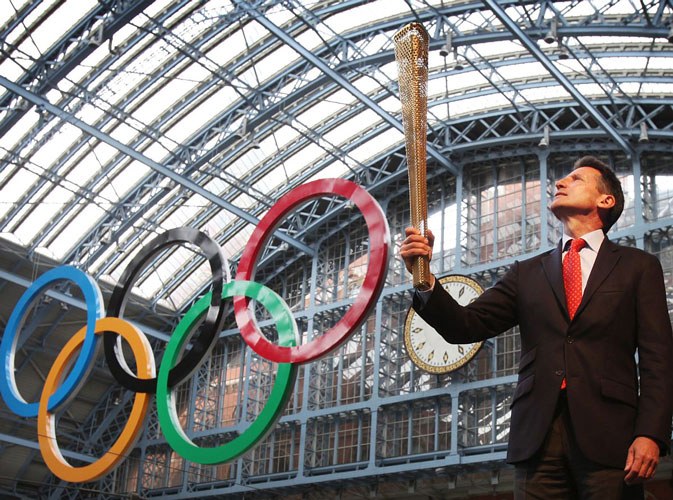 Olympic symbols is represented by several attributes - the emblem, flag, motto, principle, oath, fire, medals, opening ceremony and mascot. Each of them has its functional load and meets all the requirements of sports competitions of world level.

The emblem of the Games was approved in 1913 and is unchanged. She knows each five colored rings intertwined. It works since when were tailored to the ancient Greek symbolism of the Olympics. Five laps under a mean five continents that participate in sports competitions. In addition, the flag of any country necessarily has at least one color, which is represented in the Olympic rings. Therefore, the emblem of the Olympic movement serves as a unifying factor.

No less important is the flag. It is a picture of the Olympic rings on white flag. His role is quite simple - the white color symbolizes peace. And in combination with the emblem becomes a symbol of peace during the Games. For the first time it was used as the attribute of the competition in 1920 in Belgium. According to the rules of the Olympics the flag will participate in ceremonies of opening and closing. After the Games it needs to be transferred to the representative of that city, where after 4 years will be held following the competition.

The principle "the Main thing - not victory, and participation" is an Olympic statement, which appeared in 1896. The symbolism of the principle is that athletes in the event of its loss is not felt defeated. The purpose of it is to the participants not depressed, but rather found the strength and even better prepared for the next Games.

Traditional vows used in 1920. These are the words about the need to respect their opponents, to respect the sport ethic. An oath not only athletes, but also referees, and the members of the evaluating committees.

Of course, we cannot ignore a symbol of the Olympic games, like fire. The ritual goes back to Ancient Greece. Fire light directly at the Olympia, then transferred it to a special torch, which is traveling through the whole world, arrives in the capital of the Olympic games. Need fire as a symbol, to emphasize that sports competitions is to try to cultivate, it's a fair fight for victory and this peace and friendship.

Medals are not only a reward, but also a symbol of the Games. They serve as a tribute to the strong athletes and at the same time emphasize that all people - brothers, because on the podium are representatives of different nationalities.

Variable symbol of the Olympics can be called the Talisman. Because each event is developed by a new attribute. It must say in the Commission of the IOC, choose from a range of options. The one on which a stop is patented and becomes the symbol of the Olympic movement in a particular year. The mascot has to meet several requirements - to reflect the spirit of the host country of the Olympics, to bring good luck to the athletes and to create a festive atmosphere. Usually the Olympic mascot is presented in the form of an animal, popular in the country, where competitions are held. In some cases, it can be made in the form of fantastic creatures.