How can get pregnant with twins

The birth of a child is a great happiness in the life of every family, and the appearance of two – a double joy. Before the twins were born with a frequency of 1 in 80-100 births, but lately, in connection with the introduction of reproductive technologies, it happens more often. 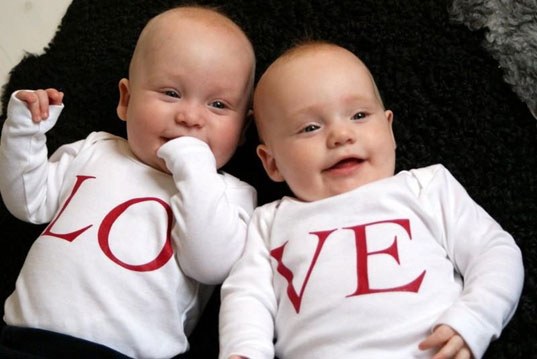 In medicine, the development in the woman's body two or more fetuses is called a multiple pregnancy, and children born in its Wake - twins. Naturally the twins can be formed in the following scenarios:
- in female ovaries ripen simultaneously two eggs that are fertilized by sperm, resulting in two embryos – with fraternal twins;
- Mature in the ovaries, one egg with two nuclei, and are formed after fertilization two embryos – identical twins;
- fertilized egg is divided into 2 independent parts, each of which develops fruit – also identical twins.

With fraternal twins are three times more likely identical. They each have their own placenta, they can be different sex and like no more than ordinary brothers and sisters. Identical are developing in a shared placenta, have the same blood group, generally same sex and resemble each other like two drops of water.

Usually twins are born in families in which the twins are in different generations. And genetic predisposition need to consider not only maternal, but paternal. In addition, the older a woman is, the higher the chance of a multiple pregnancy, especially if childbirth not the first.

To conceive twins can also after taking oral contraceptives: the body is changing, the result of which can ripen more eggs. In women undergoing infertility treatment with the use of hormonal stimulation of ovulation, twins are born in 30-40% of cases.

Finally, the main increase in the frequency of multiple births associated with the development of in vitro (artificial) fertilization: the patients are given drugs that stimulate several eggs (in some cases up to 20), remove them from puncture of the ovaries, fertilized and then transferred into the uterus of 3-4 embryos to increase the probability of having at least one child. Very often 2-3 of them hold that at successful coincidence of circumstances guarantees the family the birth of twins.