The truth about pan-Orthodox Council of 2016

Orthodox Christians around the world are awaiting an important historical event of the pan-Orthodox Council. Expectations from the meeting of representatives of all the Autocephalous Orthodox Churches divided. Most of the Christians responded enthusiastically to the news of the convening of the Council on the island of Crete, others are concerned and talking about the terrible consequences of such acts. 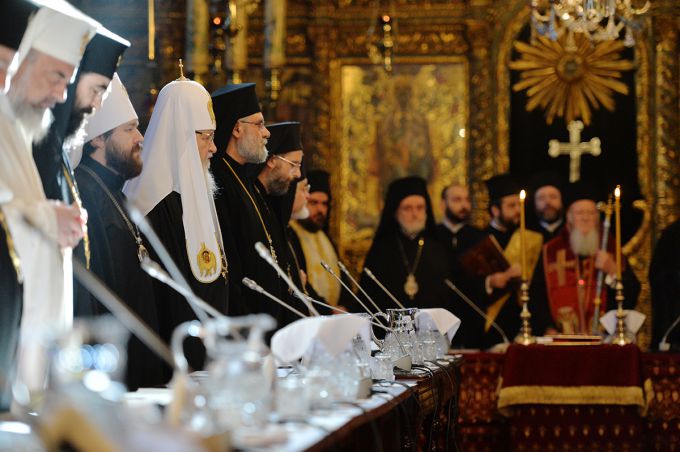 Meeting of primates of the Christian Churches (bishops and leading experts in the field of dogma, norms of Church law, liturgical theology, etc.) is referred to in Christian tradition, the Cathedral. In ancient Christian Churches the practice of convening Councils was common. The priests were discussing important matters of doctrine and the practical side of Christian life.

In 2016 on the island of Crete held an important historical event – convening the pan-Orthodox Council, which will be attended by delegations from all independent (Autocephalous) Orthodox Churches. The convening of this Council began to actively prepare since 1961. So numerous Assembly of bishops of the Church will be the first in hundreds of years after the convening of the famous Ecumenical Councils.

As we approach the date of the Cathedral (it will be held from 18 th to 27 th June 2016) among the Christians begin to appear the opponents of this action. Some Christians actively condemn Russian hierarchs to participate in the meeting, calling a pan-Orthodox Council "wolf". The hearts and minds of some Christians are concerned about the prophecy that after the 8th Ecumenical Council into the world the Antichrist will come and will close the end of the world.

Some believers believe that pan-Orthodox Council of 2016 will be adopted resolutions, denigrating the sanctity of the Orthodox Church. These include: unity with the Catholics, the abolition of posts, the calendar reform, the introduction of a married episcopate, as well as verebrate clergy. In regard to the Moscow Patriarchate sent dozens of letters and video messages in which expresses concern about the upcoming Assembly of the hierarchs of the entire Orthodox Church. Russian authorities could not respond to allegations of deviation from the purity of Orthodoxy – on the website of the Moscow Patriarchate published a document explaining the list of issues submitted for congregational discussion.

First of all, it should be noted that a pan-Orthodox Council is not 8 universal. This is clearly and directly witnessed the Patriarch of Moscow Kirill. In addition, many of the saints and ecclesiastical writers called the Eighth Ecumenical Council the Council of Constantinople, held in 879-880. At this meeting, was sentenced of any change in the creed, which now proclaims, in all Orthodox churches/ Special value for the Church have Cathedrals of the middle of the XIV century, held in Constantinople. They are known in history as the resolution of disputes about the "Uncreated light" (Palamite disputes) and on the knowability of God through His energies. It therefore is not a pan-Orthodox Council in 2016 to consider 8 universal.

At the end of January 2016 at the Meeting of the primates of the Orthodox Churches, it was decided to grant six issues at a pan-Orthodox Council, they literally can be found on the website of the Moscow Patriarchate). It is already openly stated that no dogmatic doctrine of the faith in Crete will not be discussed, since the area of the Orthodox faith does not make sense to renovate any distortion.

The main purpose of convening a pan-Orthodox Council is a consensus of the Orthodox Church on the urgent problems of modern society, as well as some rules of ecclesiastical law which have not received General recognition.

The list of documents prepared for consideration at the pan-Orthodox Council of 2016, the following:

The question of calendar reform not to be discussed at the pan-Orthodox Council.

Of particular importance is the way of the adoption of a decision on the Cathedral. It provides for the unanimous consent of all representatives of the Autocephalous Churches ("the consent of the fathers"). Thus, the exceptional agreement of all in a particular issue will be the main factor in the adoption of the resolution (as opposed to voting via the majority). This is a clear example of the Unity of the Orthodox Church.

Based on the foregoing, the Orthodox believer there is absolutely no need to worry about the future Cathedral. It is not heretical, will not alter the and take is alien to Orthodoxy doctrinal truth and liturgical unity with Catholics will not follow. Therefore, the hierarchy of the Russian Orthodox Church calls some believers to leave the attacks on pan-Orthodox Cathedral and stop to confuse the minds of the faithful members of the Church of Christ. Orthodox people are encouraged to pray to God for a worthy holding of the Holy and Great Council of Crete in 2016.