How to cook pasta Carbonara with cream

Pasta Alla Carbonara is a famous dish that is so love that almost every region of Italy trying to take credit for authorship. Pasta is traditionally made with spaghetti, smoked pork and served with a sauce of cheese, eggs and spices. In many countries in the sauce for pasta Carbonara add cream. 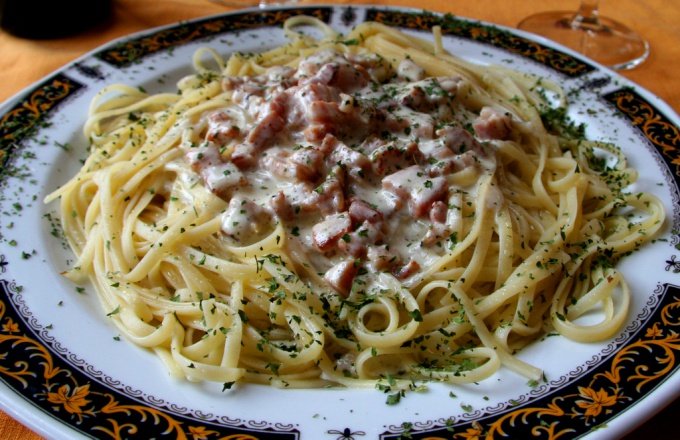 Pasta Carbonara is a delicious and mouth-watering spaghetti in a flavorful and rich sauce that are prepared quickly and will not leave anyone indifferent.

The history of pasta Carbonara

For the right to call itself the homeland of the famous pasta Carbonara fighting Umbria, Apulia, Piedmont and other Italian regions.

However, most historians of Italian cuisine believe that pasta originated in Abruzzo, thanks to the coal miners. In Italian language the le charbonnier means "charcoal-burner". People who are long gone in the forest for harvesting of charcoal, took the smoked corned beef and sheep cheese. Fresh eggs coal miners were found in the woods, and the pasta was cooked in a cauldron, definitely sprinkling its pepper.

According to another version, the recipe of traditional pasta invented one of the leaders of the revolutionary movement of the carbonari, existed in the XVIII century.

It is also believed that the inventors of pasta were American soldiers, who after the Second world war, entered Rome and in the taverns asked for his noodles to bacon and eggs.

Pasta Carbonara is a favourite dish of all Italians, which is prepared from the following ingredients:

Ham and bacon cut into small pieces and sauté in olive oil for 5 minutes, then add crushed garlic and cream. The contents of the pan stir and saute for 3 minutes.

After the specified time into the sauce for pasta Carbonara add wine and grated Parmesan cheese. Simmer the sauce until until it becomes thick in consistency. At the last stage of cooking the sauce add the chicken egg yolk and mix well.

Spaghetti boil in lightly salted water, then drain and place pasta on a large platter. On top pour the pasta Carbonara sauce, garnish the dish with fresh herbs and serve.