How to cook the Kaiser's omelette?

Kaiser omelet (camp) – dessert Austrian cuisine, which means "Imperial omelet". According to legend the origin of this dish is associated with the name of Emperor Franz Joseph I. in this omelet were treated to a peasant lost in the woods the monarch. When cooking the omelet fell apart. But the hungry Emperor "collapsed" suddenly liked the dish, since the sweet omelet was one of the most popular Austrian dishes. 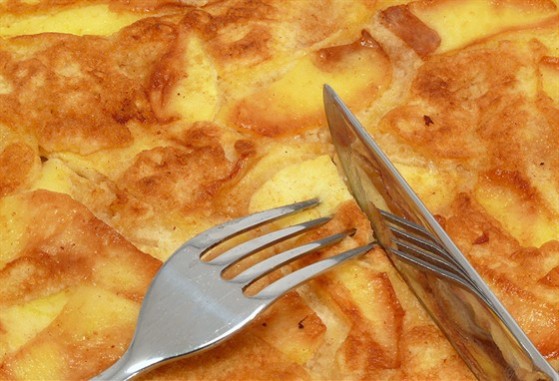 You will need
Instruction
1
Whisk the eggs special with a whisk or a blender, into the egg mixture pour the milk, add the sugar, salt and flour. All the ingredients mix well.
2
Take a pan place on low heat and melt in it butter. To the melted oil carefully pour the prepared mass.
3
After one or two minutes, when bottom of omelet is browned, add raisins, seeds and cinnamon. After the omelet will thicken, flip it to the other side. Using two forks or a wooden spoon to divide the omelette into several parts. Fry the pieces of omelette is crisp.
4
Divide the omelet into pieces, you can directly on the pan during frying and after they are complete. If you choose the second option, put the finished omelet on a plate and carefully divide it into small even squares.
5
Sprinkle the omelet with powdered sugar, serve hot or warm. Powdered sugar can be replaced with any jam, jam, jam. Such a delicious and sweet dessert you can serve for Breakfast as a child and an adult.
Is the advice useful?
Присоединяйтесь к нам
New advices