How to cook chips in the oven

One of the most popular snacks are potato chips. Such snacks can be purchased at the store or make your own. Of course, that homemade chips are tastier and have no harmful effect on the human body. 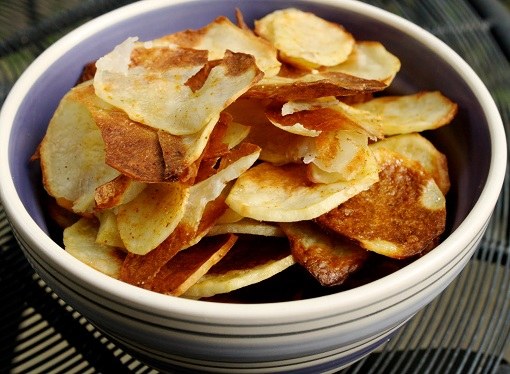 Pre-washed and peeled potatoes must be cut into thin slices. This can be done with a sharp knife, mandoline or using the shredding. If the potato has a thin skin, then it can not be removed. Those who adhere to a diet, you should soak the sliced potatoes in cold water. Thus, from the vegetables will go starch, which promotes fat deposition on the hips. In addition, prepared potatoes will be more crispy after frying.

Slices dried by placing on a towel, and then place on a baking sheet, greased. The surface should not be too much oil because it will make the chips very greasy, and with an insufficient amount of fat they can burn. Consequently, the amount of oil in the pan should be metered.

Outside of potatoes should be lubricated with oil. To impart special flavor and aroma should be added to the pan sprigs of rosemary, which have been previously scalded or flattened with a knife. Such manipulations promote the release of the plants aromatic oils.

Then put the pan in the preheated oven for 10 minutes. 3 minutes before the end of the time you can add to potatoes few cloves of garlic to add some spice. The willingness of the meals is evaluated visually, the slices will become wavy and ruddy, in addition, they can be easily separated from the surface of the pan. Hot chips sprinkled with salt, and after cooling – grated cheese "Parmesan".

The thrill, instead of rosemary, put the chopped chili pepper, and before serving, sprinkle the chips with a mixture of paprika and salt. To the potato snacks can be submitted a variety of sauces: honey mustard or yoghurt with dill and garlic. On store shelves, a number of sauces for chips, for example, "Vegetable salsa" and "Guacamole". The simplest option is the usual mayonnaise. Better if it is cooked at home from vegetable oil and eggs.

Chips can be a great addition to light salads and meat dishes. It can also be vegetables separately, grilled chicken, steamed fish.
Is the advice useful?
Присоединяйтесь к нам
New advices