What is a pork chop

Pork loin is called the thin edge of the meat without the fat layers. Pork chops ideal for cooking steaks or roasting the whole piece. This meat has an excellent flavor. 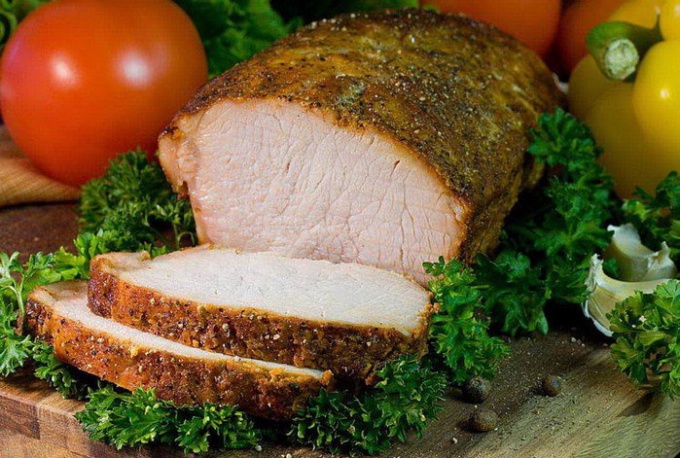 The word "chop" (sometimes erroneously written"carbonate") comes from the French carbonnade, which is the root of carbo in Latin denotes coal. It is believed that the name of chop received due to the special method of preparation. Traditionally it has been done on the quiet coal heat. Now the loin is prepared by processing of meat dry heat in special chambers, followed by baking. There are also smoked and dry-cured ham types of long-term storage.

In pork chop allowed body fat not more than 5 millimeters.

In the pig carcass, the loin is a loin, near the spine. Which it is often confused with pork loin. But they have one difference. Chop is a boneless piece of meat with a homogeneous structure. On top of it covered with a thin hymen that it is not recommended to remove, because during cooking it keeps the meat from losing moisture.

Due to the low content of fats and carbohydrates, pork chops use for the diet. This meat contains a complex of vitamins b and PP, as well as many beneficial minerals and trace elements (magnesium, potassium, calcium, phosphorus, sodium).

Loin is prepared from a huge number of dishes. At home it is traditionally fried, baked in the oven and on open fire, and smoked. It's a real delicacy that goes well with different vegetables, mushrooms, fruits and nuts.

How to cook pork chops at home

The pitted prunes, and dried apples a good wash and dry. The piece of pork with a sharp knife make longitudinal incisions, put them in mixed prunes and sliced dried apples. Meat salt, pepper. Pour into pan 3-4 tablespoons of water, put pork chops and bake in the oven for an hour and a half at a temperature of 180oC.

Pork chops for the chops is recommended to cut across the fibres, making the meat tender and soft.

Chop a good wash, dry it with a napkin or paper towel, cut into slices thick 1 cm, repel slightly and roll in flour. Then fry the chops in a well-heated vegetable oil on both sides. In the same pan in which the meat was browned, saute the finely chopped onion with crushed garlic, add mushrooms and cook everything together for 5-10 minutes, stirring constantly. Then pour in the wine, bring to a boil, add the broth and cook for 5 minutes. In the pan with the mushrooms, put fried meat, cover with lid and simmer on low heat for 10-15 minutes. After 5-7 minutes turn the meat, season with salt and pepper to taste.
Is the advice useful?
See also
Присоединяйтесь к нам
New advices