The benefits and harms of cream soups

Due to the fact that the problem of excess weight is one of the most pressing for people leading a sedentary lifestyle, and these are many of the inhabitants of the cities, sharply there is a question about proper nutrition. A rational approach to the products that should be in the diet to not overeat and at the same time receive all the necessary nutrients, helps to solve the problem of obesity. Therefore, for many the benefits of familiar dishes is particularly interesting. 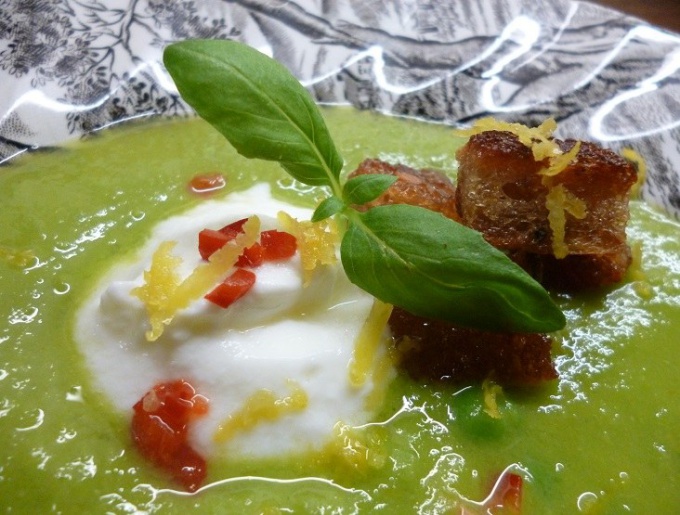 Soups – starters, in which the liquid content is more than half. They can be cooked with vegetable, meat or fish broth with vegetables, pasta, cereals. This makes the soup easy, but quite a hearty dish that is quickly digested, stimulates digestion, increases appetite.

Prepared by the method of boiling soups contain less fat than fried or braised dishes, and the products they retain more nutrients. Many of these substances into the broth, making it a full-fledged separate dish, but low-calorie.

Especially useful for soups for people who are in the rehabilitation period and recovering from a serious illness. The use of soups allows you to obtain all the necessary nutrients without overloading the digestive organs and not wasting his strength.

But, it turns out, the use soups also depends on the method of preparation. The most useful are soups, ingredients which are finely ground and diluted with broth in which they were boiled. This method of preparation allows to increase the digestibility of the soup, and their tender texture greatly facilitates the work of the entire gastrointestinal tract. Soups-cream of broccoli, pumpkin and tomato must have those who adhere to strict diets to not cause irreparable harm.

For cooking soups perfect blender, and if not, pass the soup through a fine metal sieve.

Is there any harm from soups

The main opponents of the soups are advocates of food combining. They say you can't mix in one dish and solid food and liquid as it dilutes the gastric juice, making it less concentrated, which slows the digestion of food. And although the theory of the separation power rigorous scientific evidence is not found, you can still argue that frayed into a puree food still metabolized quickly.

Cooked with vegetable broth soups – low calorie vegetarian dish will be useful for both meat lovers as reducing diet.

Another complaint about the soups is their calorie content. Adding as a thickener of flour or cream and crackers for the taste, the calorie content of this soup is greatly increased. But in this case, one could argue that flour is not a mandatory ingredient and the soup is quite good without it. A tablespoon of cream or crackers not will greatly increase the calories, but the soup will be tastier and easier to assimilate. As you can see, the major arguments against the use of soups not exist.
Is the advice useful?
Подписывайтесь на наш канал