What the Bible says about money and wealth

The Bible is one of the most published books on the planet. Millions of people daily search the Bible answers the most important questions of human existence. One of these questions, it would seem, far from the vision quest is associated with money and gaining wealth. What the Bible says about money and material well-being? 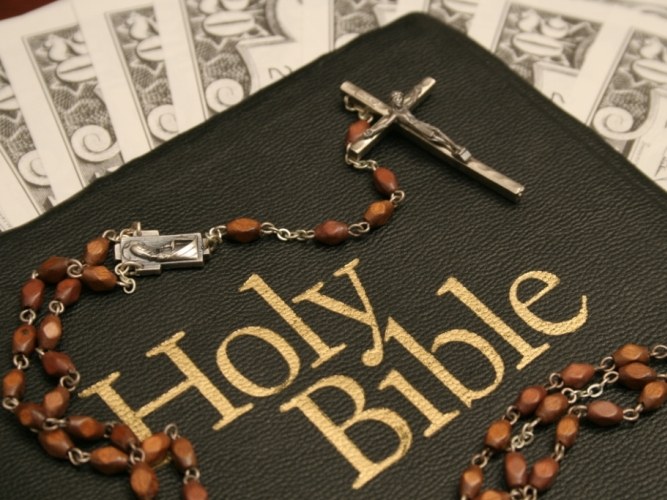 The theme of wealth in the Bible

Among those who profess the Christian religion, you can find two different approaches to subject material prosperity. Some believe wealth and prosperity spawn of hell, others call money God's gift. In order to dispel their doubts, the most thoughtful readers of the Bible turn to the pages of this ancient book.

It turns out that the biblical attitude to money are somewhat controversial and versatile. Those who tend to admire wealth, and those who curse the wealth and luxury may find in the pages of the Bible confirm their beliefs. Theologians explain such a fact is not the internal contradictions of the Holy Scriptures, and the diversity of life that the human mind is not always able to accommodate.

In the old and New Testament says about the subject of money in different contexts. In the books of the Bible mentions the inviolable laws of property, in some places we are talking about collecting money for the needs of churches, to help the poor and taxes.

However, the main theme that runs through Scripture – the theme of wealth and poverty of the human soul.

Not always money – it's good

The authors of the Bible recognize that in some instances, wealth may become a blessing. It is believed that Abraham, Jacob and Isaac got material prosperity as a divine gift. The characters of the Bible, which boast a abundance, not rare.

The positive side of wealth in the Bible are considered to be its ability to give independence, freedom and to help those in need.

Scripture shares the wealth on the just and the unjust obtained by. To the last type can be attributed to the wealth that is acquired through the enrichment of the privileged sectors at the expense of poverty of all the others. Jesus Christ in one of his parables warns the rich that they forget about the poor.

The Bible teaches that money and wealth can be dangerous and misleading. In his preaching, Christ says that you cannot serve God and wealth, it is impossible at one and the same time to serve two different masters. But poverty cannot be considered righteous if the cause was laziness and unwillingness to earn bread by their labor.

The Bible shows that money and wealth only a secondary and relative benefit. Not everything possible to buy for money. Deliverance from death and love are just a few examples. Not to buy treasures and divine grace. There are things much more valuable and important: righteousness, good name, wisdom, and peace of mind.
Is the advice useful?
Присоединяйтесь к нам
New advices