How to cook dumplings

Dumplings - a popular dish of Ukrainian home cuisine. These small pieces of dough are cooked in boiling water, broth or milk and served hot. Dumplings made from wheat or buckwheat flour, semolina, potatoes with various additives - such as fried onions or cheese. The dish turns out very hearty and served with oil, melted lard or sour cream. 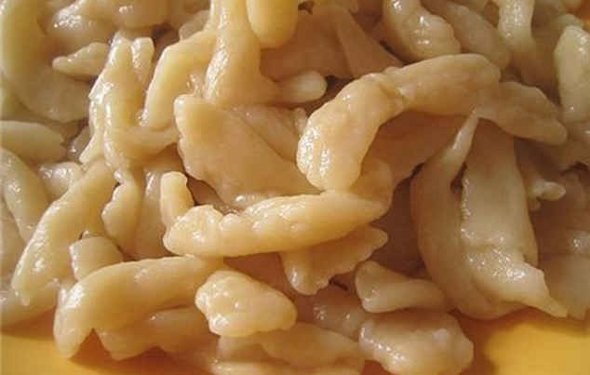 Classic dumplings made from wheat flour - a dish that touches the heart of every Ukrainian. The dish was even more hearty, you can add chopped ham, bacon, or fried onions, and melted lard with cracklings. After boiling the dumplings are brought to readiness in the oven, where they are well impregnated with fat.

Fat can be replaced with melted butter.

Sift the flour into a bowl, make in it a deepening, pour in slightly beaten with cold water the egg, add salt. Knead the dough, gather it into a ball and cover with a linen towel. Let the dough rise for 15 minutes. On the Board, sprinkled with flour, roll out the dough into a rope with a thickness of about 1 cm, cut them in small pieces. Leave the dumplings to dry - it will take 1 hour.

In a saucepan boil water sunflower her and throw dumplings. Cook the product until they float to the surface. While the dumplings are cooked, melt in a pan the chopped bacon, leaving crisp cracklings. Ham chop dice. Catch the dumplings with a slotted spoon, put in a fireproof dish, mix with melted lard and ham and place in a preheated 200oC oven. Heat the dish for about 5 minutes, then arrange on plates and serve.

Peel the potatoes, half of one tuber grate. The rest of the potatoes, boil in salted water and mash with a potato masher. Mix mashed potatoes with the raw potatoes, add the beaten eggs, vegetable oil, flour, finely chopped onion and a pinch of red pepper. Mix the ingredients until smooth.

Boil water, add salt. A spoon to collect a small portion of potato dough and lay them in the boiling water. Products cook about 8 minutes, then remove them with a slotted spoon. Before serving, pour the hot dumplings with sour cream or melted butter.

These dumplings are tastier with sour cream, whipped with sugar.

If you like a sweeter dough, increase the amount of sugar.

Curd grind with sugar, butter, salt and flour. Whisk the egg whites in a solid foam portions and add to dough. As needed, add a lot more flour. Roll out the dough into a sausage, cut it into pieces. Boil the dumplings in salted boiling water until tender. Serve hot, mixed with a small amount of butter to the product do not stick together. Separately submit sour cream, whipped with sugar.
Is the advice useful?
Подписывайтесь на наш канал