How to cook soup with potatoes

In Russia, potatoes are often called the second bread. If you have potatoes, you hungry no one left! After all, potatoes can be cooked a myriad of dishes. He is good as a side dish or a main dish, perfectly combined with meat, fish, vegetables and seafood. In soups, potatoes are often added as a secondary product. But as the main ingredient, the potatoes perfectly copes with its task. 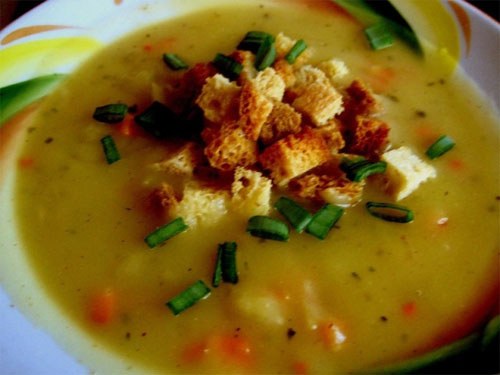 Related articles:
You will need
Instruction
1
Wash and peel the potatoes, if potatoes are large, cut them into several parts. Put the potatoes in a pot of boiling water and simmer for 15-20 minutes.
2
Slice the bread into small pieces. Chop the garlic, pour in a large bowl and add two tablespoons of olive oil. Add the pieces of bread in a Cup with garlic mixture and very gently stir. Make sure that the bread has not crumbled. Lay croutons on a baking sheet evenly and place in a preheated 120 degree oven for 15-20 minutes.
3
Wash and clean the vegetables, until cooked potatoes. Carrot, courgette and onion cut into small cubes, bacon - thin strips. Mushrooms cut into four pieces.
4
Pour into well heated pan of olive oil, then pour the onion and saute until it becomes transparent. Add the carrot and zucchini. Fry the vegetables for 2-3 minutes, stirring occasionally. Put the fried vegetables on a plate.
5
Pour the mushrooms into the pan. You can use the same oil in which the roasted carrots and onions. If it is short, add a couple tablespoons, but try not to overdo it, otherwise the soup will be too oily. Sauté mushrooms about 5 minutes, then add the bacon and fry all together for another 5-7 minutes. Remove from heat and place in a bowl with roasted vegetables.
6
Add salt to boiling potatoes for 1-2 minutes until tender. Once the potato is cooked, drain the potato broth into the Cup. Do not pour it! Mash the potatoes with a potato masher or make puree in a blender in the same pot where it was cooked.
7
Gradually add potato broth to puree until the mixture reaches the consistency of liquid sour cream. Keep in mind that after standing some time, the soup is a little thick. Put in a pot vegetables and mushrooms with the bacon, and stir. Finely chop the dill and parsley, add to the soup. Serve the soup with sour cream and warm garlic croutons.
Useful advice
Use in soup potato crisp varieties.
Instead of garlic gorenak you can serve to a dish prepared rye crackers.
Is the advice useful?
Присоединяйтесь к нам
New advices