How to cook soup with potatoes

Vegetable soup is rarely cooked without potatoes, this high-calorie product, giving easy soup the essential nutrients. But there are soups where the potato plays the first violin, defining the taste. 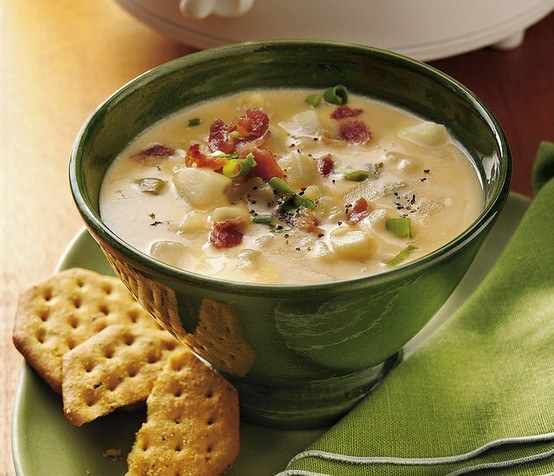 Related articles:
You will need
Instruction
1
Vegetable soupWash, peel and cut into thin julienne strips of carrot, parsley root, celery root, turnips and leeks. Heat the oil in a skillet and lightly saute the vegetable mixture. Wash and remove the veins and husks, pods, young beans and peas, wash, peel and cut into small cubes the potatoes.
2
Boil 2 liters of water, the sunflower and put in boiling water diced potato, cook for 10 minutes, add the beans, peas, washed spinach, broccoli and roasted vegetable mixture. Scald the tomatoes with boiling water, remove the skin and cut into small slices.
3
Simmer the soup until the potatoes are done, add slices of tomatoes, dosolit, if necessary, and remove from heat. Serve the soup with sour cream and greens to taste.
4
Potato soup in Italianskaya and clean the roots, put in a saucepan, cover with water, sunflower and boil until tender, drain broth into a separate bowl. Wash, peel and cut the potatoes into strips, put in a broth from under the roots and boil until tender.
5
Clean the onions, finely crumble, preheat the pan with vegetable oil and lightly sauté the onion, put through a sieve 1 tablespoon of flour, stir and add a little beef broth to dissolve the flour, stir, let simmer until the mixture thickens and the lumps disappear. Pour the sauce into the soup, let simmer for 5 minutes. Rinse and finely chop parsley, add to the soup before they serve it on the table.
6
Cream of potatosoupWash and peel the potatoes, cut them into large slices, put in a saucepan, cover with water, wash, peel and cut into thick onion rings, put it to the potatoes, put on fire and bring to a boil, cook until tender (15-20 minutes).
7
Drain the water, chop the onion and potatoes using a blender, add 3 tablespoons oil, 2 teaspoons of salt, stir. Pour 100 milliliters of milk, blend properly, add remainder of milk and stir until then, until you get a creamy mass.
8
Pour it in a pan, heat over low heat, stirring constantly. Slice the bacon into thin slices and lightly fry on both sides in a dry pan. Serve the soupby putting in each plate some slices of bacon.
Is the advice useful?
Присоединяйтесь к нам
New advices