How to make IDE

Catch the IDE is very difficult because it is clever and very cautious fish. It is revered since the times of Ancient Rus. Dishes from IDE be very rich, and ways to cook a lot. 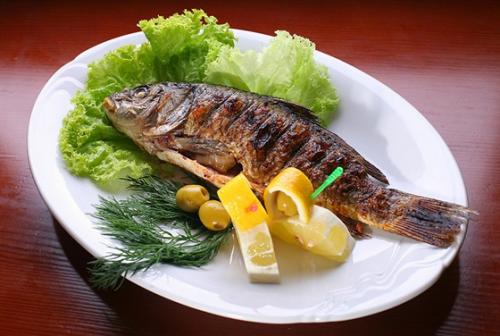 Related articles:
Instruction
1
In order to prepare a IDE with horseradish, polukilogrammovy take the fish, clean it from scales, gut and cut into pieces a La carte. Then grate the horseradish on a fine grater. In a saucepan, pour sunflower oil so that it cover the bottom. In a saucepan put 1/3 of the horseradish, the next layer put the sliced pieces of IDE. Sprinkle the first row fish with horseradish. Put exactly the same two of a number of fish, putting horseradish on each one. Add salt and vinegar to taste. Pour 500 grams of water in a saucepan and simmer the fish until soft for 20 minutes. Then pour part of the broth in a saucepan with a wide bottom, bring to a boil and add a tablespoon of flour. Carefully RUB it in oil, let writing a rolling boil and pour the sauce over the fish. Continue to simmer IDE for another 15 minutes.
2
If you want serve fried IDE, cook it in breadcrumbs. To do this, take IDE a medium size, remove the scales and gut. Rinse under cold running water and dry with a cloth. Sprinkle the fish with salt and pepper, roll in flour. Break in a bowl one egg, add to it 50 ml of milk and whisk. Soak the fish meat in the mixture and roll in 1/2 Cup crushed crackers. Heat the pan and pour into it 4 tablespoons of sunflower oil. IDE fry on one side for 15 minutes, then flip fish to other side and fry for the same amount of time. Serve with slices of lemon and garnish with parsley.
3
To bake IDE, take 500 grams of fillet and cut into small pieces. Good salt and pepper. Roll two tablespoons of flour. Fry in sunflower oil for 5 minutes. While the IDE is fried, scald with boiling water, two peppers and remove the skin. Slice the peppers into thin slices. Then peel one large onion and chop it as small as possible. In a separate pan saute the onion and pepper in sunflower oil. Add tablespoon of flour and continue to cook for another five minutes. Stir from time to time. Dilute sauté one Cup of boiling water, add salt to taste and bring to a boil. Take a skillet and grease it with sunflower oil, put the IDE and pour vegetable sauce. Bake in the oven for 30 minutes.
Is the advice useful?
See also
Подписывайтесь на наш канал