How to cook crab claws 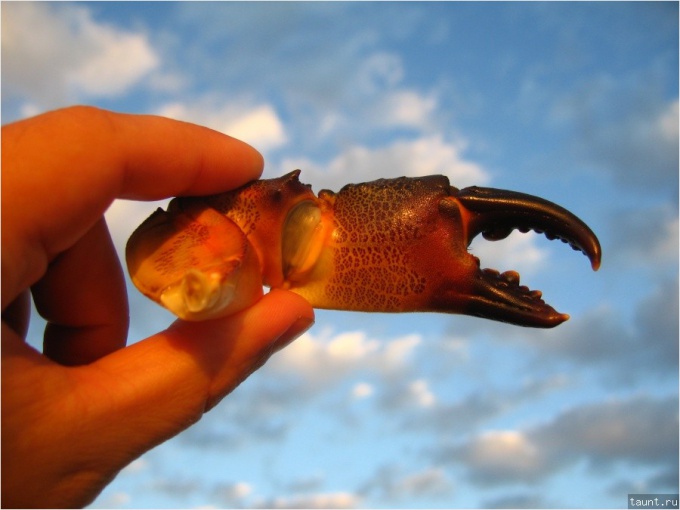 Related articles:
You will need
Instruction
1
Cut and remove with pincers large part of the shell, leaving intact the end of the claws.
2
Fill the pan with water, pour into it the sea salt and wait until the water boils. Drop the claws into the water, wait until boiling again. Cook the claws in the boiling water for about 1 minute. Remove from the pan and cool them under a stream of cold water.
3
Mix minced prawn, pepper, flour and egg white until a homogeneous mince.
4
Divide the stuffing into four lobes and cover them each of the four claws, while the end of the claws leave untouched.
5
Pour the breadcrumbs on a flat surface and vyalaya them claws to the formation of a homogeneous layer.
6
Put the claws in the pan, pour oil and fry for about ten minutes, until a beautiful crispy crust.
7
Dry claws on absorbent paper. Claws of the crab, deep fried ready. Bon appetit!
Note
If you have purchased frozen crab claws, they taste will be slightly different from those that were made without prior freezing. Please note the production date on the packaging.
Useful advice
1. In the store you can buy already separated crab claws. If you have a crab whole, then separate the claws from the body will not be so simple. In this case, it is best to cook the crab first as a whole.

2. For convenience, the claws of a crab can be divided into several parts.

3. The meat in the claws of the crab is a little different from the white meat on the shell. It is not as tender and juicy.

4. If you don't have time to cook a delicious meal, you can just boil crab claws gently with a knife to extract the meat and make a very simple salad: add in the crab meat sliced onions, boiled eggs. Season with oil, vinegar and lemon juice.
Is the advice useful?
See also
Присоединяйтесь к нам
New advices