How to play civilization 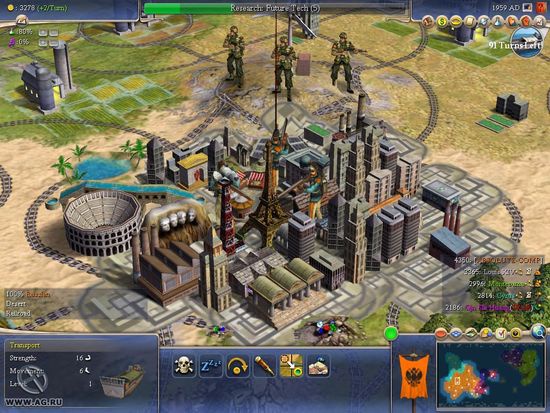 Related articles:
You will need
Instruction
1
When you run a scenario or free play, we come to the interface of the game. Basically the game runs from ancient times. To say that when setting the time later, you may experience problems with development. Newer buildings require a certain base, which is easier to develop with the era of antiquity. The main thing in the game to achieve a victory that can be achieved in several ways. To explain them does not make sense, they each to your taste. So, we begin to rebuild their civilization. Build a settlement, and send the scout squad. Intelligence is very important, it can help open part of the map, and a new civilization. You can also find tribal village, which can give certain benefits.
2
In the settlement start building the squad builders. At the beginning of the war games don't always make sense, so do more focus on the economy and infrastructure. After you create the first group of builders, you can begin to create a detachment of soldiers, and put him to defend the city (the "strengthened").
3
With squad builders cultivated the land around your city, build farms, mining companies, houses, pastures, etc. At the same time exploring new technologies. Try to explore technologies that cost the least.
4
Click twice on the city and open its interface. Here everything is simple and clear. We draw on the hammers, located next to the city name. Is the "currency" that determines the speed of construction of buildings in the town. The more you have, the less turns will be required for the construction of a building. The cost of buildings can be seen by pointing at them.
5
In order to quickly develop the technologies necessary to construct buildings, responsible for science. Libraries, universities, observatories must be in all the cities for better productivity. Build banks, markets, and improve the land for income in the form of gold. Gold is intended mainly to improve the military units.
6
Build next city to create a settler. Bind all the objects of improving the land, with the cities. It is necessary for the development of infrastructure, and more rapid movement of units. Each city will improve. When discontent build buildings that increase the joy. Similarly in diseases of the citizens. Try to build wonders when possible.
7
After the development of the economy, create military units, and start to conquer or to defend. Try to create more powerful units than your opponent. Improving the economy, do not run the military industry. Build barracks, to receive the initial experience. Attack weak enemy units, thus pumping your. Keep in mind that each unit has its own special adversary. For example, cavalry troops 100 times weaker than spearmen and pikemen.
Developing, so you will go far ahead from their opponents. Selecting one of the options of victory, begin to it strive.
Is the advice useful?
Присоединяйтесь к нам
New advices