How to prepare tasty stew

Stew, cooked at home, it turns out very tasty, as for its preparation are natural products. To make the stewed meat can be pork, beef and lamb and rabbit and poultry. 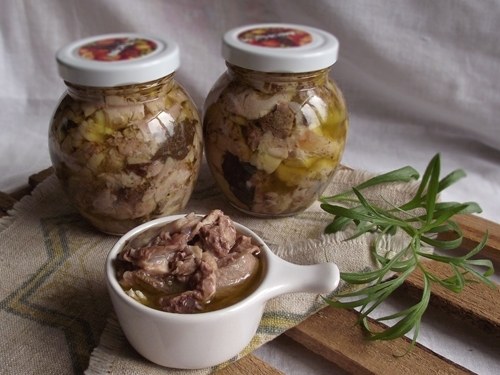 Related articles:
You will need
Instruction
1
Prepare the meat for the stew. Frozen is not recommended. Remove the bones, veins, veins. Cut the meat into pieces of medium size and wash them.
2
Put the pieces in a saucepan. Fill them with cold water so that it was above the level of the meat by two inches. Put the saucepan on the fire. When the meat has boiled, remove the foam.
3
Add to the pan black pepper, onion, cut into two parts, parsley root, sliced carrots. Reduce the heat and cook the meat for two hours. Stir it periodically, as it may stick to the bottom of the pan.
4
Remove the onions after two hours and salt meat. Cook it for another half hour or two, try the meat and if needed, add salt. In the process of making it uvarivaetsja approximately forty percent.
5
Put in a pan Bay leaf and cook for fifteen minutes, then remove. While the meat is cooking, clean your jars with a volume of 0.5-1 l of soda, carefully rinse it with water. Allow the water to drain and sterilize them in the microwave or in the oven.
6
Remove the meat from the boiling broth and serve it on the banks. Pour the broth to the brim. You can make fat melted fat and pour it over the stew. To make it easier to melt, roll bacon in a meat grinder, melt it in the pan and strain it through a strainer into a separate bowl.
7
Boil cover, and before rolling grease them with sunflower oil from the inside out to keep them from rusting. Roll up your cans stewed meat prepared lids and flip them. When they have cooled, remove them for storage in a cool place.
8
Very quick and easy to cook a delicious pork stew, if you fry meat in a pan with spices. Then put the pork in a saucepan, cover with water and simmer for half an hour. Lay the meat in sterilized jars and cover with broth. Add the melted fat in the pork stew is not necessary.
Note
Use to make delicious homemade corned beef pressure cooker. The beef in it is cooked for hours, lamb, and pork, forty minutes from start hissing of the valve. After the end of cooking put the stew in sterilized jars.
Is the advice useful?
See also
Подписывайтесь на наш канал