How to cook dumplings with cheese

Dumplings with cottage cheese are a traditional Ukrainian dish, a great variety of cooking. They can be eaten as a main dish and an exquisite dessert. 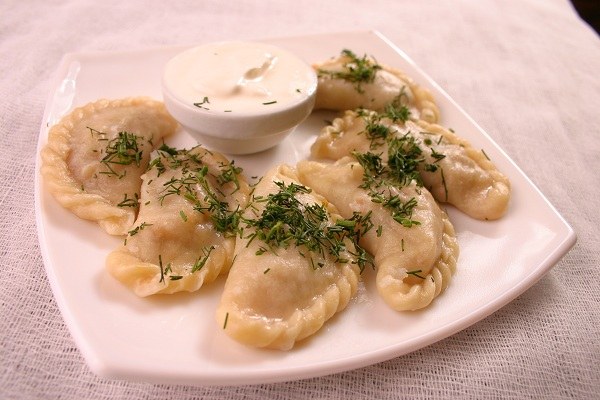 Related articles:
You will need
Instruction
1
Dumplings with curd, Salt, sugar, sour cream and beaten egg, place in pre-grated cheese and mix thoroughly. Prepare dough. To do this, combine flour, milk, egg and sugar. Put the dough on a floured surface and roll out two long thin strips with a width of 40-50 cm. The full length of one strip, lay the prepared cheese balls at a distance of 2 cm to each other. Balls of cottage cheese cover with second layer of dough and press it gently to the bottom around each ball. Cut out dumplings with a knife, lay them on a wooden Board, sprinkled with flour, and put in the fridge.
2
Sculpt dumplings you can another way: just roll out a thin layer of dough, cut out from it circles with a diameter of 7-8 inches, put them in the curd and gently zasypnica the edge of the hands. Before serving the required number of dumplings lower in salted boiling water and simmer for 5-8 minutes. Float on the surface of the water dumplings remove with a slotted spoon and put in a saucepan with butter. Serve dumplings with sour cream.
3
Lazy vareniki with cottage cheeseMash butter with sugar until smooth. Then add the cheese, egg and mix well. Put flour in such quantity that the dough is quite thick but a little sticky. Make the test long "sausage" and cut it into small little pieces (diamonds, circles, etc.). In a saucepan, pour drinking water, a little salt and bring to a boil, put the dumplings with the cheese and cook until tender. Don't cook them too long or they fall apart and acquire an ugly appearance, and the taste lose. As soon as the dumplings float to the surface of the water, remove them and serve with sour cream.
Is the advice useful?
Подписывайтесь на наш канал