How to cook dumplings in the steamer

Dumplings – traditional Russian dish, which has a lot of fans. To make the dumplings in the steamer is no more difficult than to boil or bake. But, according to doctors, cook for a couple most useful. 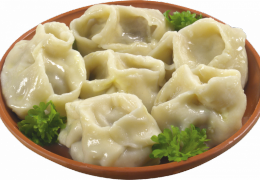 Related articles:
You will need
Instruction
1
Sifted flour pour slide, make it deeper, add salt. Beat the eggs, pour a glass of water. Knead the dough until then, until it becomes elastic and stops sticking to your hands. Then cover the dough with a towel and leave for 30-40 minutes.
2
Cook the stuffing until the dough is "resting". To do this, skip twice through a meat grinder beef and pork. To prepare the dumplings in the steamer , you can use only beef, but in this case it is better to scroll a little fat. Without it, the meat will seem dry. Add to meat salt to taste and black pepper. Clean the onions from the husk, cut into 4 pieces and roll. To make the mince not too steep, pour in a few tablespoons of boiled water and mix well.
3
Roll out the dough. The layer should be thin but strong. Cut the bowl or glass of smooth circles. In the middle of the circle put a small ball of meat. Edges connect with each other, desipite and turn in "eye".
4
Do the same with the remaining slices of dough. From scraps of dough to make home-made noodles or dazzle them and roll another layer of dough. Molded dumplings, place on a cutting Board or flat dish sprinkled with flour. Put the dumplings in the cold and let them harden.
5
In the bowl of a double boiler, pour hot water (this will significantly speed up the cooking process). Put the dumplings in the steamer and turn it on. Dumplings for a couple will be ready in 15 minutes. You can leave them on longer for a long time – half an hour. The dumplings will not fall apart, but the saturated vapor and will be more juicy.
Note
If when cooking meat met the right proportion, it requires quite a bit of spice and a moderate quantity of onions.
Useful advice
Instead of plain water in the dough, you can add cold mineral water. In this case, it will be more soft and tender.
Is the advice useful?
Подписывайтесь на наш канал