What are the fixtures for molding dumplings

The dumpling making is exhausting. Since time immemorial, women were looking for ways to facilitate home manufacture of pelmeni and vareniki. Someone still moulded by hand seems the most convenient, but some of them have turned to devices created in order to speed up this cooking process. 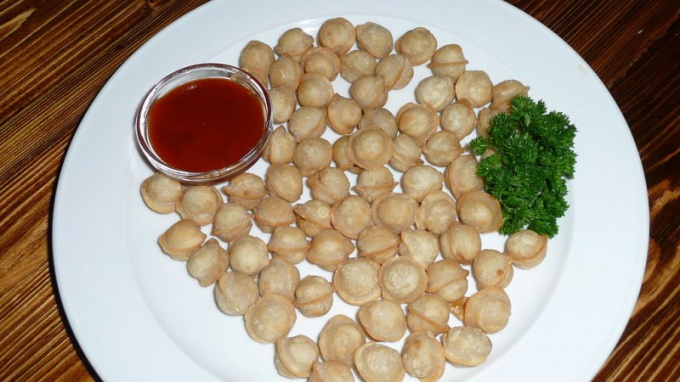 Related articles:
Instruction
1
Perhaps you eyes came across an unusual Soviet device in the form of a metal circle with cells. It is a device for making dumplings. It accelerates modeling at times, the dumplings are the same shape and size. To make dumplings, you have to roll out two thin layer of pre-cooked dough. First put on a metal circle, lightly pushing through with your fingers the dough into a cell. In the resulting deepening it is necessary to put the stuffing. Top the dough with minced meat and served the second layer is rolled out with a rolling pin. Ideally, the finished dumplings literally fall out of the cells. This apparatus is convenient because the manufacture takes much less time compared to manual modeling, and edge products good enough cut, and the stuffing will not fall out of the dumpling when cooked.
2
Also the Soviet industry was offered to home host another apparatus for molding dumplings. It was similar to the gun, the front part of which is severed, and had several nozzles that make shaped edges of the dough products. The preparation of dumplings is almost the same as in the first case. One layer of dough laid out small portions of the stuffing and cover with the second layer. Then the course is ravioli gun. It must be firmly pressed to the basis. The gun will cut dumpling, simultaneously bonding the edges. Nozzle, referred to earlier, creating either a smooth flat or notched wavy edge products.
3
Another apparatus suitable for making ravioli soon. In fact it is the same dumplings, only its form is not circular, but square and more flat. For modeling these products on the created basis, such as in the first and in the second case, laminating curved wooden rolling pin, literally pushes future ravioli. Mistress we can only walk with a knife on the resulting seams to disconnect the products from each other.
Note
To make your life even more, you can use the so-called pasta machine for rolling dough. It was originally created for the production of various types of pasta. The dough is rolled out on a pasta machine that turns thin and stretchy.
Useful advice
If you decide to use devices for the production of dumplings, remember that the stuffing should not be much. While hand-sculpting the size of dumpling can be varied, but standard cell devices for modeling do not provide a large amount of meat. Otherwise, it will burst the dumpling will fall out of it when cooking.
Is the advice useful?
See also
Присоединяйтесь к нам
New advices