How to cook sea bass

Sea bass is called the small red-Golden fish (1.2 kg), very similar to freshwater bass. She lives in abundance in the waters of the North Atlantic, has a fatty white meat and is usually sold smoked. Most often this fish is fried or baked, but for a Lenten table can be delicious to cook fish soup or stew. 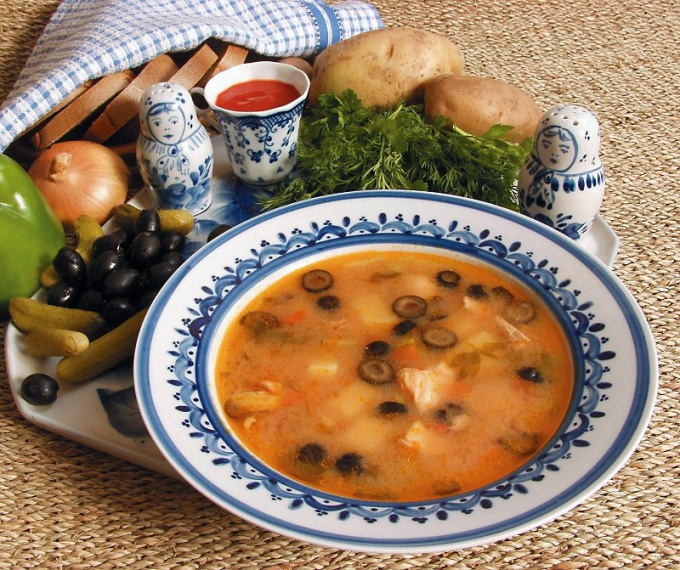 Related articles:
You will need
Instruction
1
Have the sea bass fillets on: carefully cut the bony fins of big scissors (try not to prick), clean off the scales, remove the fins roots, by making incisions at their base on the right and left, remove the innards, cut the head and tail. From the head, remove the gills.
2
Discard the gills, scales and entrails, the rest fold in a bowl. Rinse the carcass under cold water, remove the spinal bone, making an incision along the back, split the bone in two or three parts and place in a bowl. Fillet put in the fridge.
3
Boil the broth from the bones, tail and head: pour 1.5 l of cold water, put on a slow fire, bring to a boil, remove the foam, peel the onion, put in soup, add salt, black pepper and Bay leaf. Simmer for half an hour, then let the broth to cool and strain, removing the onion and spices.
4
In a pan heat one tablespoon of vegetable oil. Pickles peel, cut into thin strips, put into a pan and simmer for five minutes. Place the stewed cucumbers in a bowl, in a pan heat another tablespoon of oil. Prepare the tomatoes: drop a few seconds in boiling water, remove, cool slightly and remove the skins. Cut in half, remove the seeds, cut the flesh into cubes and place in the pan.
5
Place the stewed tomatoes to the cucumbers, in a pan, heat the remaining vegetable oil, drain the brine from salted mushrooms, rinse under cold water in colander, finely cut into cubes and fry in a pan.
6
Bring stock to a boil, put in it mushrooms, onions, tomatoes, cucumbers and simmer for about ten minutes. Fillet cut into pieces and put into the broth, then add capers and simmer for ten minutes. Remove the pan from the heat and let it brew.
7
Pour hodgepodge on plates, put them in black and green olives and thinly sliced lemon, sprinkle with dill.
Is the advice useful?
See also
Присоединяйтесь к нам
New advices