Thinking about upgrading your garden plot, special attention should be given to this important element of landscape design, such as decorative garden paths. The garden path - an integral part of the suburban area. Some even consider them the main attribute of the garden - it tracks not only give him a well-groomed appearance, but divided into functional zones. 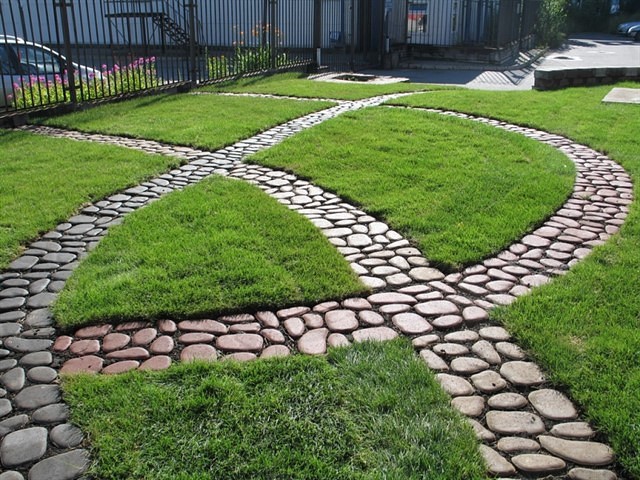 The paths can even hide some imperfections in the design of the garden. In addition, you need to think not only about beauty, but also comfort: the paths to move around the site will be much easier, and in rainy weather the mud will not be recorded in the house.

Usually the tracks are placed on the front of the house. They combine the various buildings and areas of the site (e.g., garage, shed, Playground, gazebo, pond). Most often one main track, from which branch off secondary. Landscape designers offer to design a network of garden paths so that they all intersect in one place, which will be the center of the whole composition.

For sites that have large bumps, elevation or depression of tracks doing the winding, bypassing all obstacles. Sometimes you have to build ladders to make it easier to walk. These winding paths can become a "highlight" of the site. But we must not forget that the tracks must first meet with the architectural look of the site in General, so, for example, for a simple, classic style is more suitable for straight lines.

Think about sidewalks need more in the planning stage of the site. First, the whole plan is recommended to draw on paper or in a special computer program. After that start the device paths.

To track last a long time, you need to pay special attention to their Foundation. Usually first on the site, make markings, then remove with a shovel the turf. In the resulting "trenches" sleep of crushed stone or gravel, then sand. Sandy "cushion" of well-tamped and leveled. Further action will depend on the selected material paths. Common brick or tile can be laid directly on the sand. For more complex materials such as clinker, must be concreted track.

Around the tracks is usually planted flower beds, the gravel is poured or organize lawns. From that, how much responsibly you will organize tracks on your site, will depend largely on its consistent appearance.