Researchers from the University of Surrey decided to conduct a little experiment. His results suggest that women who snack on the go, subsequently eat more food than is necessary for the body for the day. 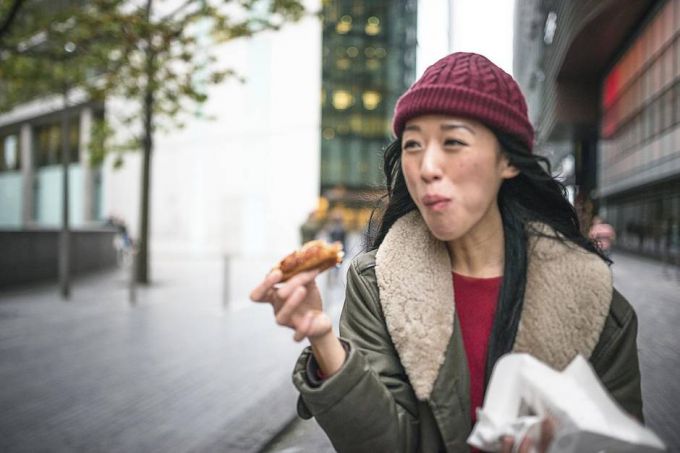 This experiment involved 60 students who were divided into 3 groups. Each member of the group took in eating a granola bar while making different actions.

Eating while talking with friends.

Ate while watching the five-minute clip from the popular television show.

Eating while walking down the corridor.

A little later, participants were asked to complete questionnaires and to participate in the next experiment. They were asked to eat a variety of snacks, which consisted of carrot sticks, grapes, chocolate, chips.

Further, experts have estimated the amount of food that is eaten every woman during these two tests. They found that those participants who had a bite on the go, ate about 3 times more than those who ate a granola bar in a stationary state.

Professor Jane Ogden, the lead author of this study, in an interview with the journal of Health Psychology" suggested that such results may be obtained because the walk is a powerful distraction. This factor disturbs a person's ability to control the effects of eating on hunger. Another explanation, in its opinion, may be the fact that even just walking along the corridor can be seen by the body as a form of physical exercise. This justifies the subsequent overeating as a form of compensation.

Through this experiment, scientists first studied the immediate effects of the body during a meal on the go. To determine the long-term impact of this habit on the body, new studies will be undertaken and tests.