We all know that the cake with the majestic name "Napoleon" has a very pleasant sweet taste. Each layer is impregnated with a layer of sweet cream, creating a unique taste and brings a festive mood. But not everyone knows that layers of history, stretching back into the distant past, had a direct link with the Emperor Napoleon Bonaparte. And though history leaves in depth of centuries, the beginning of it all is lost. 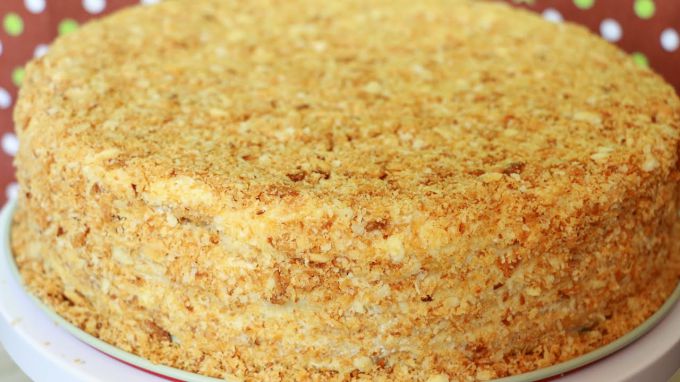 There are a lot of versions, how did this culinary masterpiece. Rumor has it that the Emperor, spending time with his mistress, bending over her neck and gently talking about tender feelings, was spotted by a jealous and suspicious wife. She asked the opinion about the situation, speechless.

Dreaming with the idea of trouble, resourceful Napoleon explained – he told the maid about the desire to bake a cake, whose recipe the other day came to mind. The Emperor instantly transferred random ingredients that I had to write to confirm their intentions. And the wife, being a sweet tooth was to bake a cake and to ensure the integrity of Bonaparte.

One of the witnesses of this situation, the Marshal, had to talk about a stunning cake around the Palace, and soon the cook has baked this beautiful cake. He made a splash on everyone who tried it, that was the beginning of history "Napoleon".

Yet according to one version, the cake began to cook after the persecution of the army of the French Emperor from Russia. To a celebration of this 100-year events of the Moscow bakers and confectioners has invented many dishes, but most people had a small puff pastry, not particularly eye-catching in appearance. But the taste was unique.

Its crispy cakes with a delicate blush was soaked in a delicious custard. Cupcake triangular shape symbolized the three-cornered hat of the Emperor, and anyone who has taken a bite, I can fully enjoy the Russian victory over the French.

Form of cocked hats of the Emperor, alas, was not fixed over a delicious dessert and the cake was transformed into a more cake now prepare round, square, and even rectangular, and cut into small pieces.

However, whatever the origin of the cake "Napoleon", his popularity will never run out. It became a classic sweet dish, and its presence on the table will always bring a smile and a desire to try a slice of your favorite dessert.