How to make dried squid beer

Dried squid are among the most popular beer snacks. You can make this dish at home. If master this technology and to show a little imagination, you can surprise your guests with the most original flavors. Instead of salt, for example, can be used for drying squid some spices that bring significant changes to their flavor. 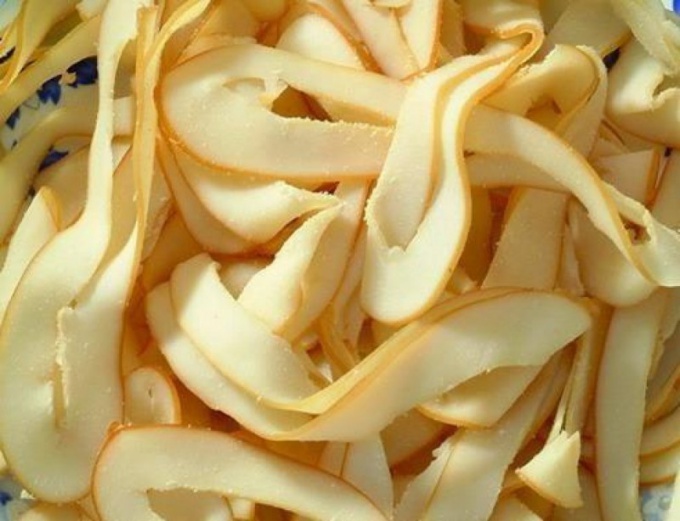 For the manufacture of dried snacks at home you can use squid in any form. If you prefer frozen food, please note that thawed carcasses for too long is not worth it. Otherwise, they will fail to gently slice, and the final result will differ from expectations.

Before you decide which kind you would give a dried squid carcasses should be within a few seconds, pour over boiling water, and then careful and slow movements to remove all film. Only after that, start cutting blanks. Squid can grind rings, thin strips or even a fairly large plates.

For the manufacture of traditional dried squid you will need 600 g of primary product, 1 liter of room temperature water and 5 tablespoons salt. Squid grind in any way, and then lower it for 5-10 minutes in salted water. Lay the workpiece on a towel or napkin and wait until they dry out.

The final stage of drying squid make using a microwave oven or in conventional oven. This process is quite long and takes about an hour. Dried squid is better on the grill.

To give a dried squid more intense flavor by changing the marinating process. Salt does not dissolve in water, and immediately RUB it with crystal harvesting. Squid needs to soak for several hours, after which it is similarly dried in the oven. The remains of the crystals can be removed with a brush or cloth, but is much easier initially to use a fine salt.

Dried squid with herbs and spices

To make an unusual beer snack of dried squid will help spices, seasonings and dried herbs. Show imagination, you can invent your own dish. During the pickling of carcasses can be used not only salt, but paprika, pepper, chopped onion or garlic. For such experiments will fit almost any seasonings and spices.

Original marinade for pieces of squid can be done, for example, sugar, vinegar and pepper. The number of additional ingredients can be pick up at their discretion. In the prepared mixture of squid must be at least 20-30 minutes. The vinegar should be diluted with a small amount of water. The unusual combination of sugar and pepper give food a spicy flavor.
Is the advice useful?
See also
Присоединяйтесь к нам
New advices