What spices are suitable to pork

We all have different tastes, someone who likes to cook pork with salt and pepper, and some prefer the kitchen to experiment with different seasonings and spices. There are certain spices which are always a good complement to the pork - whether it's lard or pork loin. 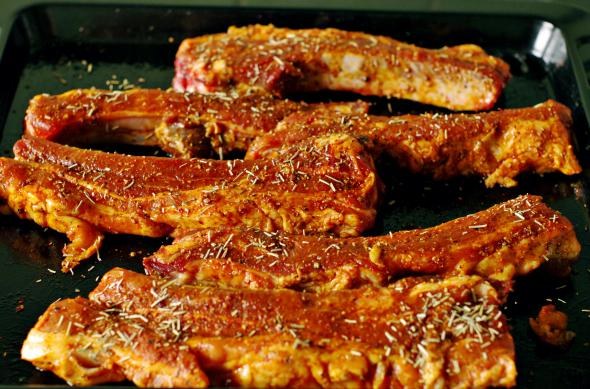 This versatile spice to any meat, not just pork. For example, very often cook bacon with salt, usually per kilogram of leaves a glass of salt. It should be noted that here there is no fear of pea - this noble product does not take extra. While cooking pork smoked salt used in the brine. Meats, for example ham, aged in salty brine or cooked. If pork should roast, boil or steam, then it is better to salt the dish at the end of cooking, this ensures that you have the softness of the meat.

The addition of sugar we are not so prevalent, but the Chinese add it to pork fun - they like sweet taste.

Pepper - king of spices. Willing to add when cooking fat using any kind: from the most delicate paprika before searing Chile or Cayenne varieties. For example, in Hungary, salty bacon, dusted in red pepper, is a national dish.

Pork steaks, often sprinkled with a mixture of peppers, but black pepper will be here by the way. The French gourmet, they soak pork in cognac that is infused with the pepper. Due to this, the meat has an interesting spicy flavor, and bits of spice not crunch on the teeth.

In pork soup peppers should be laid in the beginning of its preparation, and a second dish - at the end. But the seeds of pepper is better to throw - they give a little flavor, giving dishes their bitterness.

Pork sausages are not without marjoram. With special respect to this spice are the Germans, who even called him the "sausage pot". After the Germans began to add marjoram when cooking a variety of sausages.

Cumin is also perfectly suited to pork. It is added to ground pork to use when roasting meat. It should definitely add to braised cabbage with pork in order to remove a specific flavor of this dish.

Cloves are a versatile spice that goes well with pork. Delicious baked ham in foil, pre-Utica abundantly its buds cloves.

An exotic taste of the pork gets through curry or spice blend userman. Curry meat you can simply fry in a small amount of oil. A mixture usyanmyan used in the preparation of Moo Shu pork.

It is impossible to imagine a roast pig without the addition of horseradish. Hell is coming to the aspic of pig's feet and pig's lugs. For such original dishes it is preferable to take fresh horseradish, rubbing his own.

With pork combine garlic, rosemary, Bay leaf, savory, onion, nutmeg, white mustard, coriander, parsley, dill, celery. But it is a matter of taste. If you do not want to understand all the spices and seasonings to pork, you can buy a universal set of spices for pork, which includes the majority of their listed ingredients.
Is the advice useful?
Подписывайтесь на наш канал