How to cook low calorie cheesecakes

It seems that low-calorie cheesecakes couldn't be. Still, the mixture of curds, flour, eggs and sugar, covered in oil, not like a dish that will help to get and keep in shape. However, in the framework of infinite culinary wisdom fits a lot of recipes, the existence of which is difficult to imagine. And low-calorie cheesecakes in. 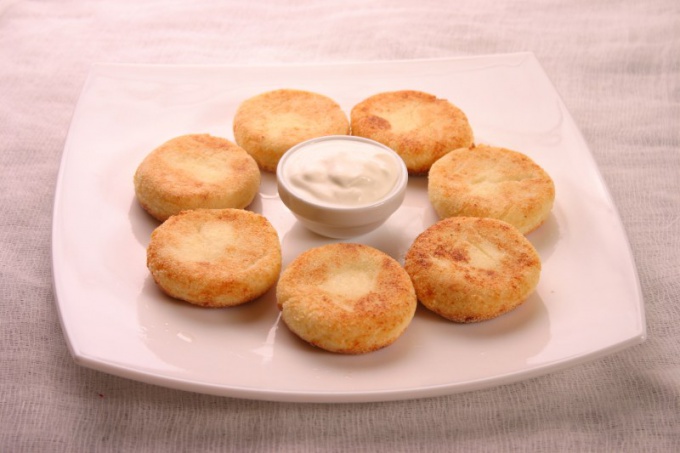 If you started cooking low-calorie cheesecakes, make sure that in their composition there was no ingredients containing "extra" calories. Buy two packs of low fat cream cheese, one egg instead of flour – semolina instead of sugar – stevia or honey. But it is better to do without the sweet.

Cheese stir until smooth, add the egg and mix again well. Gradually to the resulting mass add semolina, and as long as necessary to obtain the right consistency. Usually the required number of monkey – ounce glass. If you want to add to cheesecakes berries or fruits.

When rolling into balls, the dough doesn't stick to hands, grease your palms with vegetable oil or spray with cold water. Grab a tablespoon of dough, lay the ball on your palm, roll and then a little push. Then lay out on a hot frying pan greased with a little vegetable oil and fry it on slow fire until tender.

Another method of cooking low calorie cheesecakes is: buy 250 g low fat cottage cheese, egg will require 2 protein, flour – just a tablespoon, one Apple and a teaspoon of cinnamon. Mix all the ingredients together. Apple previously turn into a puree using a fine grater. Place the mix in a deep plate, beat with a mixer until a homogeneous mass. Fry on a drop of oil on a slow fire or bake in the oven for 10-15 minutes at 180 degrees.

To cheesecakes turned out to be really diet, they do not need to fry. At your disposal – oven, slow cooker or steamer. If you decide to bake cheesecakes, I must do it on parchment paper or with foil. At 180 degrees the cheese will bake in about half an hour. If you are using a steamer or slow cooker, pancakes will be prepared also for half an hour. However, do not be afraid "pale" cheesecakes, when cooking such foods for a couple of Golden crust by definition can not be.

To enhance the appearance and taste of dietary cheese cakes, try to cook them berry-fruit dressing. Take any berries or fruit, mix them in a blender and pour into a separate plate or directly on top of the cheesecakes.

If you are preparing a dietary cheese cakes in the oven, try to add to cheesecakes, muesli and pour them on top of the honey. Work and sweet and useful.
Is the advice useful?
Присоединяйтесь к нам
New advices