How to make a timer in Minecraft?

One of the most interesting classes in Minecraft, many fans of this game venerate the creation of various mechanisms and schemes. In such endeavors are usually not complete without red stone, as well as devices based on it. For example, in some cases the scheme will need a timer. 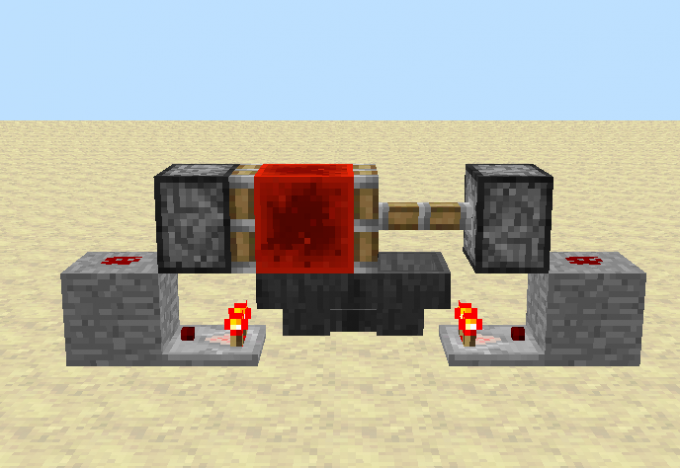 The timer in the mechanisms of red stone in minecraft

It is worth saying that when Minecraft came to light, in the world of computer games already existed a lot of similar "sandbox" (e.g. terraria). However, he quickly occupied its own niche and is loved by many gamers more than some of its counterparts. One of the reasons for this state of Affairs was probably just the opportunity to build in this mining game various mechanisms.

In any of the circuits created by the players, a special role is played by the Redstone - in the form of red torches or dust. Latest here performs the function of the wires connecting between themselves the parts of the mechanism. Not without Redstone and the timer.

They can consist of different elements, but often where you want the delay a Redstone signal (Redstone), the players set the timer. The term covers a whole group of devices, and not all of them will look like a clock.

The simplest version of the timer - oscillator - represents a chain of at least three (otherwise it will burn out) inverters. Latest different valves called negation (NOT) and are devices that return signals that are opposite of those that were received via wire from the red stone.

But more often, players construct timers from repeaters (or combine them with inverters). Such schemes have many shortcomings, but for their purpose they are often "one-off" - for example, serve to activate the dynamite in simple traps.

Repeaters (sometimes called English-style repeaters) are made of three stone blocks, which are located in the bottom horizontal row of the bench. In the Central slot is a unit of Redstone dust, and on either side of it - two red torch.

Create a timer with repeaters for one time use very easy. For this you need to put on the ground or on the floor in a series of some number of repeaters, and along it - almost the same, but devices it was one less. This empty square, place the Redstone dust and hold her from the track to the side, and at the end of this wire to turn the lever.

To more a long line of repeaters on the opposite short side should also be put Redstone to the other end of which is connected to the dynamite. When you press the trigger, after a while you will hear an explosion (in just a few seconds that it will stay that created such a device "miner" will have already run far away).

How to make an ordinary timer

However, if you want to build something like a clock counting down the seconds, you have to act a little differently. For most simple devices of this type (with the showing of digits from zero to nine) will need a lot of red torches, repeaters, and Redstone dust, any solid blocks and a sticky piston 21.

First, you need to build a wall height of eleven blocks, with a thickness of two and a width of seven. It to be done through holes in the open eights (similar to that visible on the electronic scoreboard clock) so that each of the "strokes" it was the size of three blocks (all of these groups will be seven). Insert in these holes all the sticky pistons for the second layer of the wall.

The timers can operate permanently - if their circuits are arranged so that they operate automatically. However, sometimes they "freeze" when you restart the world, or when players are removed from them more than ten chunks.

On the reverse side of the wall to connect among themselves all the groups of pistons wires from Redstone. Then, for each horizontal line of eight to put three repeater, and the vertical rows, one at a time. To bring to each repeater red dust.

From the rear of the future timer - a little distance from it and parallel to it is to lay out ten of the seventeen lines of solid blocks each. The distance between them should be two to Cuba. On each of the rows on one side only (same for all) it is necessary to put the seven lamps, stepping down from the edges of the lines and taking a step in one unit. Connect the whole structure of the multiverse, bringing solid blocks.

Now we should hold on top line of Redstone, retreating into two blocks at the beginning of each new round the resulting figure and ignoring its short side (but it is necessary to put "dots" of red stone at the corners). Then pour krasnokamennaya dust only torches.

Along the lines of the opposite from the red lamps to place repeaters. By the way, all the repeaters in this design it is better to put on the maximum delay (especially if the computer is not very powerful).

It remains only to undertake a series of Redstone dust across a snake (but only on the ground, not pouring anything into its constituent blocks) connected to each other torches mounted on the walls. The resulting seven tracks to connect to each of the eight sides of the timer (in this case on one of the sections of the diagram, you need to have a number of repeaters).

With the opposite end of the snake a little distance to put the block button, moving the wire from the Redstone. To close the holes in the scoreboard timer - where are the sticky pistons and solid blocks in a single layer flush against the wall. When enabled, the device will begin flashing numbers.
Is the advice useful?
Подписывайтесь на наш канал