What to do after a tick bite

Spring and summer is the time for collecting mushrooms and berries, it's time for picnics and tenting, EN nature. But the forest is fraught with serious danger: its constant inhabitants – ticks are a major threat to humans. 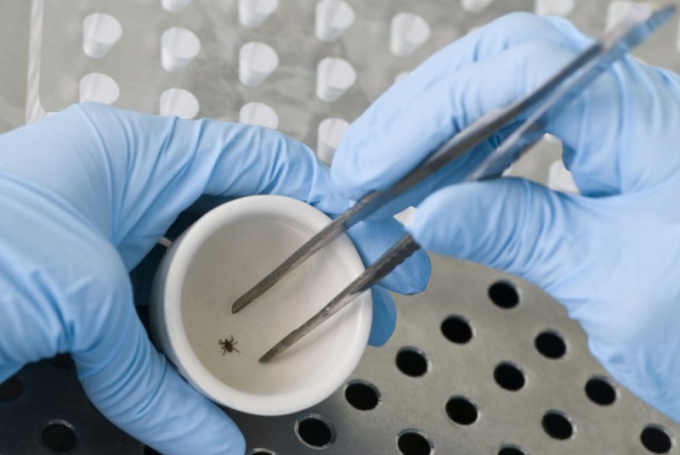 Mites that live on the territory of Russia, often are carriers of two serious diseases: tick-borne encephalitis and Lyme disease. Ticks live in forest litter – a layer of last years leaves and fresh grass, warmed by the sun and moderately moist. In swamp forests, and open dry glades mites are not found.

Attacking the man, the tick secretes from his salivary glands a substance similar to the anesthetic, so usually one does not feel the bite. Further, within a few hours, stick the tick feeds on the blood, accumulating it in reserve in your abdomen, and then disappears. During this time, if a tick is infected with a virus encephalitis or borreliae, there may be infected person.

Tick-borne encephalitis – an acute viral disease affecting the nervous system. Its symptoms are similar to flu: fever, headache, pain in the muscles. After some time, added neurological symptoms caused by brain damage – seizures, muscle damage, rarely coma, and, consequently, death. Sometimes after the disease for life remains partial or full paralysis of the limbs. Lyme disease – a disease that primarily affects the joints and muscles. Untreated Lyme disease can lead to complete disability.

What to do if bitten by a tick

The most appropriate action when a tick bite is the address to the doctor. But if you get to hospital is not possible, you need to try as soon as possible to get rid of the mites on their own. If it is infected with tick-borne encephalitis virus, the probability of becoming infected is directly proportional to the contact time of the tick with blood of man.

To remove a tick it is necessary very carefully, trying not to crush, tweezers counterclockwise. In no case do not pull and pull – there is a risk to leave in the skin of the head of the tick, which will have to be removed surgically.

After removing the tick, inspect. He should have five appendages: four legs and a proboscis. If processes is less so something that can stay under the skin.

You can't throw the tick after extraction. It must be placed in a small sealed container and take it to the study based on the paragraphs of the study of ticks in your city is better to know in advance).

In 10 days after the bite required to donate blood for antibodies to encephalitis and borreliosis. After that, the hospital will tell you when to come for repeat tests because antibodies need to track dynamics.

First aid for tick bites is the introduction of immunoglobulin for the prevention of encephalitis. To give you a shot or not – everyone decides for himself. But remember, if the disease does develop, the treatment will be very long and serious. For the prevention of Lyme disease can be treated with antibiotics.

How to protect yourself from tick bites

Going into the woods, you need to wear closed clothes with long sleeves and a hat. Every two hours is recommended to spend itself - and vzaimoosmotry. Pets after a walk should also be examined carefully.

Against tick-borne encephalitis has a vaccine, but the first introduction should be done in the fall, for 6 months before a possible contact with ticks. More about this can be found in the district hospital. From Lyme disease there is no vaccine.
Is the advice useful?
See also
Присоединяйтесь к нам
New advices