How to enable rain in Minecraft

"Minecraft" is a sandbox game created a few years ago, only one developer and became today extremely popular. The entire world of Minecraft is composed of blocks that can be break and then something of them to build. As in any other world, there are its conditions, features, rules, and even a variety of weather. For example, some players annoyed by the rain, as because of his weak computers, the game "slows down". Those who have a powerful computer, on the contrary, I want to know how to turn the rain. 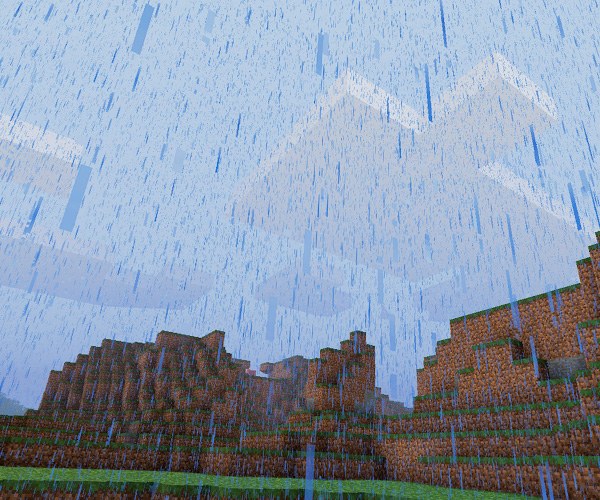 The rain in Minecraft is a weather phenomenon which is accompanied by a variety of processes and effects that affect the game world. Among the effects you can select the most clear — falling to the surface of the particles of water, special sounds (sometimes the sound of thunder), etc. Added rain was in Minecraft version 1.5 Beta.

Rain works in both singleplayer version and the multiplayer. It can be seen falling from the sky in the place where there are no obstacles in the form of blocks. The process of this phenomenon is absolutely not affected. When the block hits the rain drop is an animation of splashing. So the game is once again not loaded, and with it the computer, the rain is not extended to the entire map.

Turn on or off rain

The digital value can be adjusted at its discretion, in addition, you can use the command /weather rain 1, which will include the rain only for a very short time. Rain or snow another switched off or switched on by the command /toggledownfall.

Impact on the world

Water falling from the sky, leads to the wetting of wolves, extinguish the fire on the mobs and the surface (except hell-fire stone), wetting the beds. Among other things, that the rain increases the chance to catch the fish in the ponds. Rain is able to come in contact with the surface located under the open sky horizontally and nothing else.

From the rain faded out flaming arrows, taking damage stranger Territory, snow Golem and Ifrit. The stranger teleports constantly, eventually dying. Rarely, he manages to hide under something and survive.

The torch, which is mounted on a block or in the hands of the player, not extinguished by rain. Rain powerless in the lava, but is able to put out the fire on the surface (except hell-fire stone). New mobs in the rain don't spawn, but the old do not burn during the day (as usual), as the rain prevents.

In the world of Minecraft there are several types of biomes. In those in which high temperatures (desert), rain is impossible. The rain is able to fall down on the sand, for example, located on the beach, but please don't desert biome. Often in the rain to see the lightning and hear the thunder.
Is the advice useful?
See also
Присоединяйтесь к нам
New advices