How to make a cocktail "Bloody Mary"

Cocktail "Bloody Mary" first appeared in France in the 20-ies of the last century. While the French dismissed the drink. A cocktail appreciated in America, where soon moved its Creator, Fernand Petio. 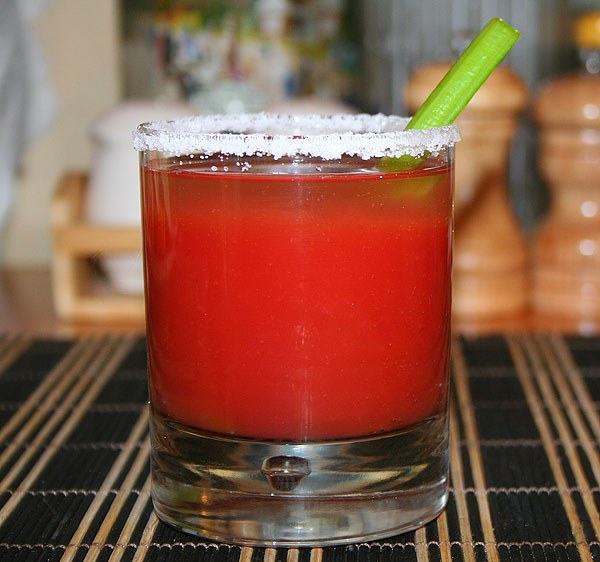 Related articles:
In most cases, the mixing of ingredients in the preparation is designed to eliminate the characteristic taste of alcohol. Cocktail "Bloody Mary", by contrast, emphasizes its taste the contents of traditional Russian vodka.

In a glass pour 100 ml of tomato juice sprinkle grinded salt and a mixture of red and black pepper. The spices should form a kind of a clear boundary between the layers of tomato juice and vodka. Optionally add in liquid 3-4 drops of celery juice and 10-15 ml of fresh lemon.

Then in a glass pour 50 ml of vodka. You will need to try not to mix strong drink with tomato juice. For this purpose, the knife leaned against the wall of glass diagonally. Vodka thin stream poured on the knife blade. As the content of the glass is to raise the tip of the knife above. As a result, the vodka slowly drains to the surface of the juice without mixing with it.

Decorate the cocktails with olives. Often the decoration is a sprig of dill or a slice of cheese.

Features of preparation of the drink

Despite the seeming simplicity of the recipe, the cocktail will be much tastier if when it is executed to consider some nuances. So, it is better to sprinkle the tomato juice first, grinded pepper, and then use the peppercorns coarsely ground. After you add vodka large pieces will float up, forming another "pepper" layer and adding sharpness to the first throat.

The layers were very precise, it is better to use very cold vodka and warm tomato juice. Rarely used opposite cocktail recipe Bloody Mary, when first glass is filled with vodka, and only then pour the tomato juice. The blade of the knife, the juice flows to the bottom of the glass viscous mass, gradually displacing the vodka into the top layer.

Such a cocktail you cannot prepare in the glass with a flat bottom. The perfect container for this drink is the glass. However, the interface between the layers in the second case, is not expressed so clearly.

It is worth noting that cocktail with separate layers most popular in Russia. In the U.S., for example, prefer to shake all the ingredients in a shaker. Cocktail with clear layers known in America as "Eastern variant".

Many connoisseurs of "Bloody Mary" I believe that the use of the shaker deprives the beverage of its inherent charm and use. There is a theory that invented the cocktail has been specially for people suffering from a hangover. Drink and snack in one Cup – what could be easier?
Is the advice useful?
Присоединяйтесь к нам
New advices