Pasta or noodles that appeared on the shelves with a light hand, Korean enterprises of fast food, enjoys a good demand among buyers. Today, many, even Russia, the company specializiruetsya in the production of these foods. No one will deny the convenience of this method to get the first or second dish for 5 minutes, but that's how this snack is healthy, thinking a few. 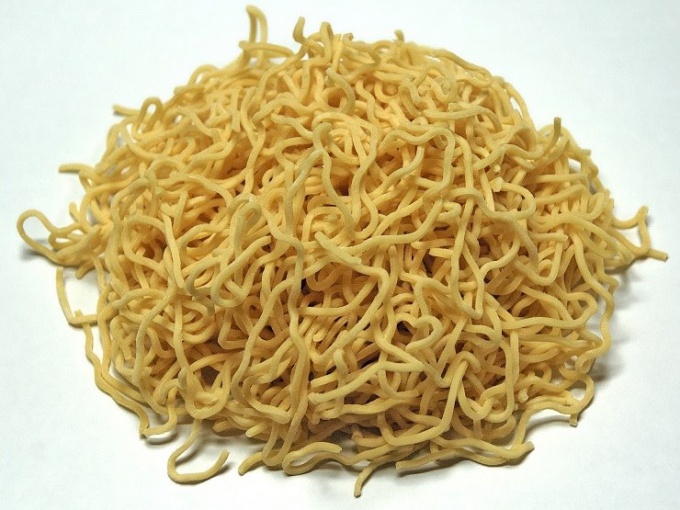 How to make instant noodles

Originally, the noodles were made / / as for the Chinese soldiers. Because the dough is contained spices and salt, and chemical additives-baking powder, soldiers just gnawed it to feed. Later someone had the idea to fill it with boiling water for a few minutes and there, adding in the noodles pieces of meat and vegetables.

The basis of the instant noodle is wheat flour with high protein content and "fast" carbohydrates, which are digested almost immediately and provide a fast way to get rid of feelings of hunger. Of flour mixed with water, preservatives, dyes and flavoring additives, make the dough. It is rolled out into thin sheets and, with rollers, on which the blades cut into thin strips. Thin and long vermicelli is then passed through a special drying apparatus whose platens are moving at different speeds, whereby the noodles are crushed into dense bars. These bars are then cut into pellets and Packed in bundles or plastic utensils, adding to the packaging bags with spices, a soup or sauce base, chunks of soy meat or fish.


What's the harm of instant noodles

In this kind of noodles and the sachets that you find in the package with it, the higher the content of sodium glutamate, E621 with the encoding. Why it is considered that the main harm of noodles in this component. But, in fact, MSG is an amino acid found in many natural foods – seaweed, beets, malt, shrimp and marine fish. It affects the taste buds, enhancing the sensations, and is involved in metabolic processes. MSG is used in pharmacology for the manufacture of drugs, which treat hypertension, and nervous disorders.

But, as with any medication, it must be applied in a limited number, and many manufacturers add it "from the heart", since MSG is able to do quite edible even dish, for cooking of which used substandard products with bad taste.

But the main harm of the noodles, of course, in other ingredients. She refined wheat flour, from which it is made, contributes to obesity, but other components – the TRANS fats that trigger the growth of cancer cells, preservatives and unnatural dyes. They are present in small quantities, but if you eat the noodles regularly, can harm the health. Therefore, the use of instant noodles should be the exception, not the rule. This is especially true for children and pregnant women.
Is the advice useful?
See also
Присоединяйтесь к нам
New advices