What is fiber optic Internet

Fiber optic communications – transmission method of information, which as guide systems using fiber-optic cables, and the role of the media signal performs the electromagnetic radiation of the optical range. From all available communication systems fiber-optic lines have the highest throughput which can be measured by terabyte per second 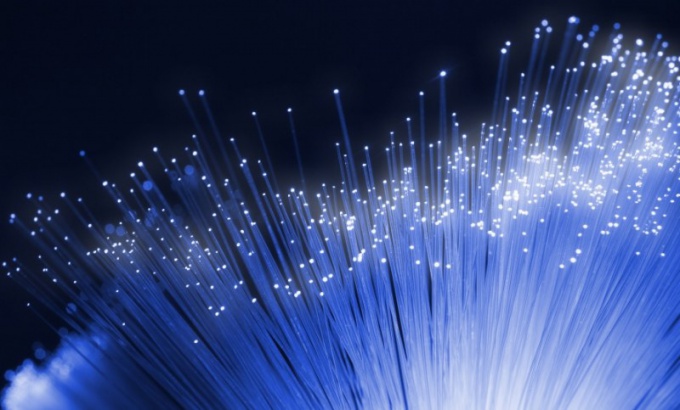 The device of optical fiber

Fiber optic cable consists of glass fiber performs the role of the center conductor of light, surrounded by a glass sheath with a lower refractive index than the center conductor. The light beam formed by the diode or semiconductor laser, distributed along the Central conductor, not beyond the glass shell.

22 APR 1977 in long beach, California, General Telephone and Electronics for the first time used optical channel for the transmission of telephone traffic at speeds of 6 Mbps.


The history of creation

The technology of transmitting data using optics is not very complex and was developed quite a while ago. In 1840 the scientists Jacques Berlinetta and Daniel Colladon an experiment was conducted to change the direction of the light flux by refraction. In 1870, John Tyndall released work is devoted to the nature of light, in which he referred to Babinata and Colladon experiment. The first practical application of new technology has received in the 20-ies of XX century. Then, two experimenters John bird and Clarence Hassell demonstrated to the scientific community the possibility of image transmission through the optical tube. This opportunity was used for examination of patients Dr. Henry Lamm.

The first fiber optic cable was invented and developed in a series of experiments in 1952 by physicist Narinder Singh Kapani. He created a harness from glass fibers, core and shell, which have different refractive indices. Sheath in the cable Kapani has served as a mirror for a more transparent core, which solved the problem of the rapid dispersion of the light beam. Due to this, a beam of light began to reach the end of the optical fiber, allowing to use this method of data transmission over long distances.

In 1960, with the invention and development of sufficiently compact GaAs semiconductor lasers, the problem was solved with a light source. In 1970 specialists Corning Incorporated was established high quality fiber optic cable, do not use in their work the repeaters. The appearance of these inventions gave a powerful impetus to the development of a new promising wired.

Today fiber optic cable is the fastest way to transfer data, it is used for establishing high-speed lines of the Internet, medicine and many other fields. Fiber laid across continents and on the ocean floor for tens of millions of kilometers, but even this does not affect the speed of data transmission. Therefore, despite the relatively large cost of equipment and tools, fiber optic technology continues to develop rapidly and are the most popular method of quickly transmitting information.
Is the advice useful?
See also
Присоединяйтесь к нам
New advices