How to celebrate Ivan Kupala

The night before Kupala night – the shortest of the year. The holiday of Ivan Kupala was the result of a merger of Christian and pagan traditions. In the Christian it is dedicated to the Nativity of John the Baptist, and pagan, an ancient deity of fertility, Kupala. With the Midsummer night is so much beautiful and poetic rituals. 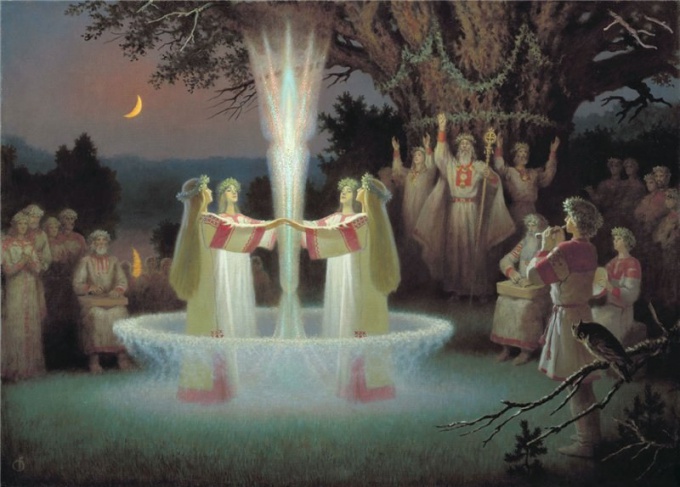 Related articles:
In ancient times Midsummer was celebrated in the night from 21 to 22 June. New style holiday moved on the night of 6 to 7 July.

The rituals and traditions of Kupala night

Midsummer night is considered the night of magic. According to legend, in this wonderful night animals speak like human beings, trees move from place to place, of herbs find special healing power. So healers this night is collected and harvested medicinal plants.

The necessary decoration of every girl in the night of Ivan Kupala should be a wreath, which must be present such flowers and herbs as burdock, Ivan-da-Marya, bogoroditskaya grass and bear's ear.

The main rituals of Kupala night is jumping over the bonfire, divination and dousing each other with water. Usually in the night of Ivan Kupala kindled several fires. Through one of the fires jumped, evoking abundance and fertility. In the middle of the other fires put poles, which he put on the wheel, the skull of a horse or strengthened at the top of the pile of straw. The burning wheel was a symbol of the sun, it is often rolled from the mountain to the river, reproducing the path of the sun in the sky. A horse skull symbolized the evil spirits and destroyed to protect themselves from evil spirits, which especially suffered greatly during this time. A bundle of straw symbolized the failures of the past, and therefore were burned to the ground. Also around the campfire and danced and sang songs calling on fertility.

In a Midsummer night girls wondered at her spouse by throwing wreaths into the water with a lighted candle. If the wreath sank immediately – so mate will not love; if the crown quickly came to the shore, from which it is thrown, it means that this year the girl is not destined to marry; if the wreath lasted a long time on the water and swam far, the wedding will take place very soon.

Also in a Midsummer night it is customary to pour each other with water. It is assumed that if a young man is accidentally or intentionally dump a girl, he is destined soon to become her husband. In Russia the night of Ivan Kupala traditionally opened the swimming season. It was believed that the water really warms up only to this day. And mermaids after Midsummer became gentle and ceased to harm bathers.

Everyone knows the legend according to which in the night of Ivan Kupala is the only time of the year – blooms fern. His flower was attributed all sorts of miraculous properties, primarily the ability to specify hidden in the land of treasures. However, to go looking for him, few dared brave, because the evil power was trying to prevent them.

Perhaps not all the Midsummer rites can be repeated in our day. But the walk in the forest at night (better yet – in a large company), dance around the fire, divination by wreaths and a collection of medicinal plants can become a fascinating romantic adventure.
Is the advice useful?
See also
Подписывайтесь на наш канал