Svan salt – the ingredient for cooking that is used in Georgian cuisine. The basis of the mixture is salt, and other components are mixed to her in certain proportions. The use of such salt is possible to impart a spicy flavor meat, fish and first dishes, and sauces and dressings. 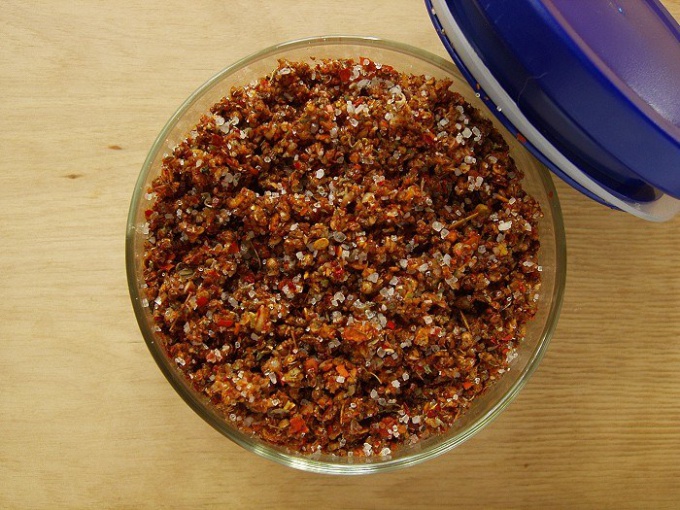 Part of the Svan salt eight ingredients. For a more traditional taste they have to be mixed in certain proportions. 6.5 tablespoons usual coarse salt you will need 100 grams of garlic, one tablespoon of dry blue fenugreek, the same dried dill, cilantro, red pepper, yellow flower and half a tablespoon of cumin. All the ingredients are thoroughly crushed and mixed, resulting in a universal seasoning.

Please note that the yellow flower which is used for preparation of Svan salt is the dried petals of Imereti saffron. In some sources, these plants called marigolds. Blue fenugreek is a Georgian condiment, which is a powder with a tart flavor. In Georgia call "utskho suneli".

The process of Svan salt cooking has its secrets. Garlic should not just grind, and knead thoroughly to drain juice. Do it better with a mortar. Stir the ingredients with a spoon is possible only at the initial stage of preparation. To obtain the desired consistency it is better to stretch all the components by hand.

Svan salt should not resemble a powder. The product has the consistency of wet seasonings. Store ingredient in jars or containers that can be tightly closed with a lid.

Who came up with the recipe Svan salt

Svan salt got its name from the region, which became her "home" - Svaneti. This place is a small village located in a mountainous area. To get to it is quite difficult, and the main difficulty people experience during the delivery of food. Salt since ancient times occupies a special place in the diet of the Georgian people. In order to save valuable product, the local population came up with the recipe through which you can increase the amount of salt and to provide themselves with inventory for a long time.

First salt mixed dried spices. The desired increase in volume has been achieved, but not enough beloved in Georgia, acuity. So the mixture was supplemented with garlic. The seasoning was so impressed the inhabitants of Svaneti that her recipe has not changed for centuries.

There are several recipes Svan salt. Because of the impossibility of acquiring some seasonings in the stores, additional ingredients are often used coriander and ground chilli. The hardest component is considered to be Georgian seasoning utskho suneli. However, the replacement well dried coriander.
Is the advice useful?
See also
Подписывайтесь на наш канал