Growing cucumbers is hard work, this is quite a capricious culture requires attention and good care. Inexperienced gardeners are often faced with different challenges, when the cucumbers will wilt and die. How to grow cucumbers to save the crop? 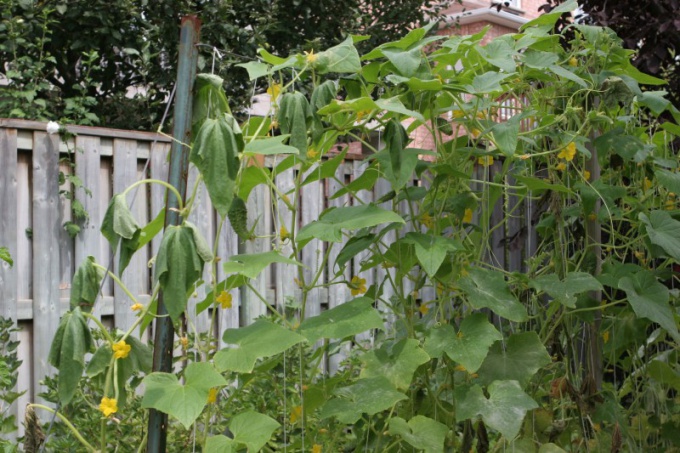 How to grow cucumbers right

Especially is insulting, if yesterday whip cucumbers looked fine, quickly served in growth, they were massively formed fruits, and the next day cooked as cucumbers, their leaves hung limply, and the ovaries disappear.

Most often the reason that green cucumber wilt - in the wrong climate: if exposed to high temperatures, seedlings of cucumbers, not only fades, but also loses the ability for pollination. After all, growing cucumbers in a greenhouse requires proper selection of varieties and more thorough care, as it is required for varieties of cucumbers for open ground. In other cases, it may be because of the numerous diseases which are bacteria, viruses and other infections, almost like people.

The most dangerous and common diseases of cucumbers are:

In most cases of cucumber diseases cause mushrooms-parasites, so you need to carefully track the first signs of disease, remove the affected leaves, fruits, well-ventilated greenhouse.

Helps spraying potassium permanganate with a solution of chalk or special anti-fungal drugs that are sold in stores.

In other cases, the seedlings of cucumbers can fade with the defeat of the Oia pests that suck juices from the leaves or gnaw the roots. These pests also many, but the most common ones include:

To deal with them with infusions of garlic, onions or chemicals.

If you do find signs of illness to actively and immediately begin treatment, there is a chance that most of the harvest can be saved, you should pay special attention to the selection of varieties of cucumbers grow on the packages usually give the plant resistance to diseases and pests, be sure to examine the data.