Why yellow ovaries of cucumber

Gardeners who grow cucumbers in the greenhouse, quite often face the problem of the ovary on the whip turn yellow, rot and fall off. And it all starts with the petals of a flower, then the rot goes to the ovary, and the process can not be stopped. To avoid this annoying trouble, it is necessary to know its causes and avoid them. 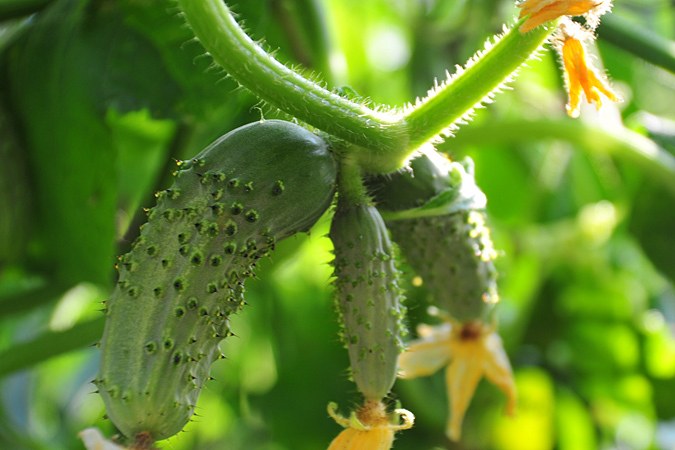 Bacteriosis is a frequent cause of decay of the ovaries. Its spread on cucumber ridge contributes to the high humidity of soil and air, as well as saudinet planting. The appearance of bacterial blight may be due to violation of the conditions of detention cucumber landings: poor soil, sudden temperature changes, etc.

Gardeners will often ignore the rule of farming, warning that it is impossible to grow cucumbers from year to year on the same plot. The infection tends to persist in soil and infect the next planting seasons.

To prevent rot, you can spray cucumber whip with 1% Bordeaux liquid or a 0.4% suspension of copper oxychloride. Typically after this treatment, the cucumbers begin to tie well and develop.

Cucumbers are very sensitive to watering. They should be watered frequently and regularly, especially during fruiting. It is impossible to prevent drying of the soil. However, it is also unacceptable to turn a cucumber ridge in a puddle, and this may lead to waterlogging of the soil, and from it already to mildew and rot. All this will inevitably lead to the fact that the flowers and the ovary will begin to turn yellow, rot and fall off.

Watering cucumbers need only warm water in cool weather – in the daytime, in a Sunny early morning. On hot days it is advisable to do a refreshing watering (not necessarily to the soil, you can just sprinkle the leaves), evening watering, as usual. If the ovaries have started to turn yellow (this happens most often in cold, wet weather), carefully remove the flowers and treat these places with a weak solution of potassium permanganate (potassium permanganate).

A large number of ovaries

Do not allow development on one cucumber whip more than 25-30 ovaries. Cucumbers grow quickly, especially in the greenhouse, and the all the number of formed fruits of the plant may not be enough. As a result, some prevent to grow and develop others, and as a result, the farmer has a lot of yellowed and rotting ovaries and the same – small and the curves of cucumbers.

Some varieties of cucumbers, and in particular hybrids can form on one whip at the same time up to 150 ovaries. To harvest please you, time to remove the newly formed shoots, even those which have female flowers.

The lack of trace elements in the soil

The deficiency of micronutrients in the soil can also cause yellowing and abscission of flowers and ovaries. Gardeners lose at the same time to 50% harvest of cucumbers. Especially the notable lack of trace elements where often made of mineral fertilizers (nitrogen, potassium, phosphorus). The situation can be improved the introduction of micronutrients, containing manganese, copper, boron, molybdenum, zinc and others.

With a large lack of trace elements acceptable use of highly concentrated drugs produced by manufacturers in the form of microgranules – Brexil calcium (Brexil Ca), Rexolin plus (Plus Rexolin). You can also make fertilizer, "Crystal", "TerraFlex and "Master" containing NPK – nitrogen-phosphorus-potassium fertilizing with a complex of microelements. To replenish the deficiency of trace elements will help applied to soils wood ash at a ratio of 300 g/sq. m.
Is the advice useful?
See also
Подписывайтесь на наш канал