What is a CISS for your printer

A large number of printers for home or office use can be bought almost at cost. But such purchase will be effective only at first glance. Buying a printer for a very reasonable price, the owner will spend a huge amount on the purchase of cartridges, the cost of which sometimes reaches up to half the price of the printer. But there's always a way for significant savings. For example, you can buy the CISS for your printer. 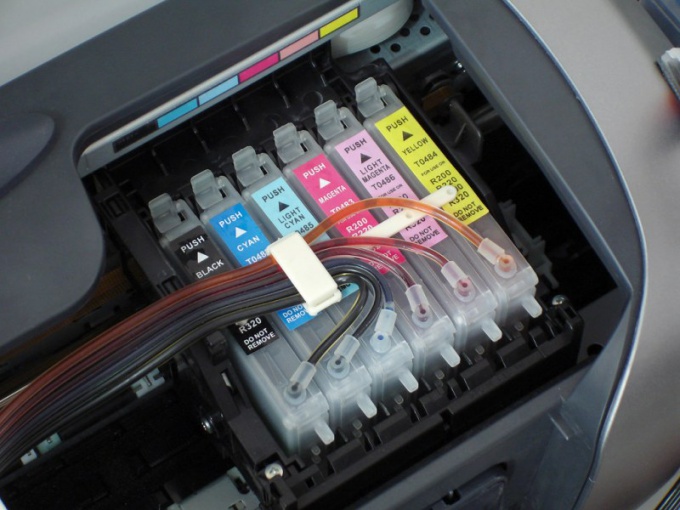 Related articles:
The printer can now be bought at prices ranging from half to two thousand rubles. The paradox, but the cheaper the printer, the more expensive will its maintenance and the cartridges in the kit, usually with only 30-50% of the nominal volume. It should be noted that such extravagance in the service applies only to inkjet printers, while their digital counterparts are always more expensive and more economical. And refill cartridge for a digital printer can be an unlimited number of times, that's just the color and photo printing, this technique of its owner will be able to please very rarely. However, the craftsmen learned how to fill and "disposable" cartridges for ink-jet printing, but guarantees their safety during refuelling no one is. Recently in the world of office equipment had a useful invention called CISS, the acronym of which means continuous ink supply system, which saves hundreds of percent by avoiding the purchase of expensive cartridges for inkjet printing.

The principle of the CISS for your printer

Ink when using CISS for a printer is served a continuous stream of refillable tanks directly to the printhead. CISS for printer consists of several vessels of the MARRIOTT, silicone cables and ink themselves, which because of the complete integrity of this system under pressure are fed to the print head. As a rule, CISS for your printer can be set independently, especially in the Internet, there are many video tutorials demonstrating the installation method of CISS. Ink supply system is the know-how and is commonly used in interior design of printers with the only exception that the built-in CISS is hidden from the user's eyes. Simply put, CISS is a set of four vessels with paint and plumes like those used in medicine droppers. In the kit for any CISS is a drill to expand the holes for the plume, syringes for filling vessels of MARRIOTT, gloves for hygiene and cleaning liquid vessel. For pulling cables when installation of CISS is used clip.

When installing the CISS, you need to read the instructions and soberly assess their strength. In that case, if self-installation of CISS is impossible, you should call a Pro, otherwise you can ruin the cartridge.

The benefit of using CISS for printer

When printing using genuine ink cartridges they replace happens even if the cartridge is empty only one color. In CISS is also possible to visually evaluate the ink usage and refill them as needed. CISS is simply necessary for the commercial use of the printer, because the cost of the printed photos and booklets will be reduced to 20-50 cents apiece.

Printer with CISS is set in one place and not be subjected to frequent moves, because one awkward movement can cause the depressurization of the entire system.

The real saving when using CISS reaches a hundred percent. When printing a large volume of products can not be afraid that the printer will stop printing due to lack of ink in the cartridges. We should not forget about the environmental component when using the CISS, because this system is durable, and the user does not have to pollute the nature of the spent cartridges, which are rarely recycled.
Is the advice useful?
See also
Подписывайтесь на наш канал