How to prepare a delicious cream cake

Honey cake, or Medovik are one of the favorite traditional treats for most Russians. It is prepared in almost every home, and each family has their favorite "special" recipes, secrets and tricks. 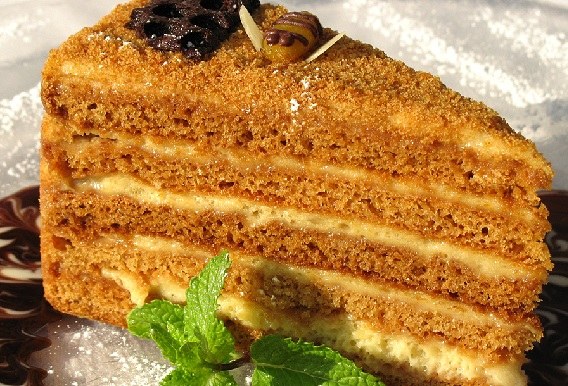 One of the traditional and very delicious cream cake – sour cream. It is not too oily and perfectly sets off the taste of honey cakes. Take low-fat sour cream, add sugar to taste and vanilla on the tip of a knife. Mix well until all the sugar is dissolved. The cream is ready!

Some hostesses also add in sour cream milk or cream. For example, take 500 grams of sour cream, a Cup of sugar, a pinch of vanilla and a quarter Cup of milk. Mix and shake thoroughly with a mixer.


Delicious cream is obtained from the thickened cream. Add small piece of butter and vanilla, beat until a dense foam.

The cream of condensed milk

"Shutochnyi" cream to cook is as simple as sour cream. Take a jar of boiled condensed milk and about a third of a pack of butter (this number can be somewhat reduce or increase – depending on how much cream you want to). Slightly softened butter, add condensed milk, pour a little vanilla. Whisk the cream in a homogeneous mass with a mixer.

Another version of this cream with honey. Take 400 grams of sour cream, 150 grams cream, a jar of condensed milk and two heaping tablespoons of honey with uppers. Mix everything together and whisk.

You can take a normal (not boiled) condensed milk and cook it yourself. To do this, remove the cans with paper label, place the unopened can in a pot of water and simmer for 1-2 hours.

You can add the cream a little cinnamon and lemon peel.

To prepare a typical custard, take a glass of milk, half a Cup of sugar, one egg, a tablespoon of flour with a slide and a pinch of vanilla. Combine flour with eggs in a homogeneous mass and gradually add the milk. Then pour the sugar. Put the cream on low heat. Stir constantly, making sure that the mass remains homogeneous. Bring cream to a boil but do not boil. Thickened cream remove from heat and let cool. Add the vanilla and whisk. You can optionally add when whisking a knob of butter.

To make the cheese custard, prepare the custard first ordinary and cool it. Then while beating, add 250 grams of curd mass. The cream will get a little more "is dietary". You can use cottage cheese with raisins or other dried fruit.
Is the advice useful?
See also
Присоединяйтесь к нам
New advices