What varieties of cucumbers give a higher yield

In recent decades specialists have bred a large number of new varieties and hybrids of cucumbers resistant to diseases and adverse weather conditions. It is best to plant on his land a few varieties of different time of cultivation and its purpose, as you get a guaranteed harvest. 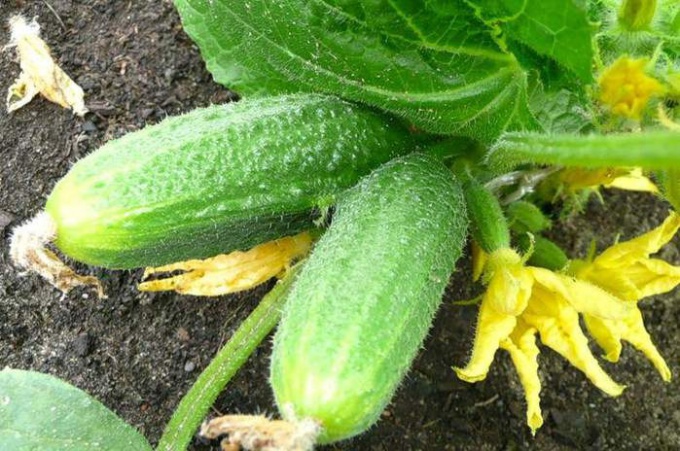 Varieties of cucumbers for growing in greenhouses

For cultivation in greenhouses should be selected parthenocarpic hybrids, since they do not depend on bees for pollination. There is a large group of shade-tolerant varieties and hybrids of cucumber, suitable for cultivation in heated greenhouses in winter, in spring and in autumn when daylight is too short. This new hybrid "Marathon", "Marathon", "Olympics", "Ladoga" and "Northern lights", and many others.

It is possible to grow in greenhouses pollinated by bees and varieties. The plants pollinate without the help of insects were bred hybrids pollinators. It's the cucumbers with the male flowers, which are popularly known as barren flowers. We need to get them to bee pollinating plants. Among the hybrids pollinators should be allocated to "Gladiator" and "Hercules".

A large harvest of cucumbers pollinators do not wait, but if you put them next to the hybrids pollinated by bees, the harvest will certainly be rich.

On a warm bed under the film shelters and open ground can be successfully grown as parthenocarpic and pollinated by bees hybrids. The most productive among the new hybrids "Farmer", "True friends", "Acorn", "Captain", and so on.

For cultivation in the open ground without the cover film suitable cold tolerant varieties and hybrids. To fulfill these requirements cucumbers "Be healthy", "Tot", "Tom thumb", "Dragonfly", "Ant", "hit of the season", "First class".

Cucumbers these varieties can be planted in the garden in early summer, and in September you have on the table are strong and delicious vegetables that are perfect for canning and for fresh consumption.

Very popular with gardeners of steel beam cucumbers and gherkins. It is the fruits that grow on a few pieces from one sinus to the stem of the plant. A fine crop of hybrids give the "Maryina Roshcha", "hit of the season" and "Green wave".

If you want to obtain a high yield in the early summer for a short period, grow early ripening varieties. On the packaging of the seeds are "hybrid Sprinter". Cucumber varieties "Regina-Plus", "Bouquet", "Cupid", "Alphabet" give the greatest yield in the first month of fruiting.

Cucumbers for pickling and salads

Traditionally most suitable for conservation are varieties with a dense skin and pimples. Beautiful zasolochnymi qualities of many modern varieties and hybrids, such as "True friends", "Sultan", "Chistye Prudy", "Farmer", "Lord", "First class", "Dragonfly", "Ant", "Kozyrna Karta", "Bouquet", "Alphabet" and so on.

Salad cucumbers have a thin skin. In size they much exceed the value of cucumber, suitable for canning. Large size and excellent taste qualities of cucumber varieties "Zozulya", "Chinese", and "alligator".